The Russian Embassy in Washington DC believes that something might be “broken” in the US State Department, given the recent barrage of tweets targeting Moscow by spokesperson Heather Nauert.

Over the last 24 hours, Heather Nauert has unleashed a massive anti-Russian campaign on Twitter: Blaming Russia for civilian casualties in Syria; praising the controversial Oscar-winning ‘Icarus’ documentary for exposing Putin’s “disregard for international rules”; and glorifying Ukraine for its sacrifice to “ensure reliable gas delivery to European customers” in the face of Gazprom aggression. 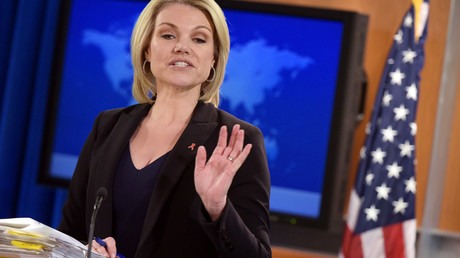 While anti-Russian rhetoric coming out of Washington is nothing new, the latest Twitter spasm has raised eyebrows at the Russian embassy in the US.“We always assumed that Heather Nauert closely follows events in the world and inside the State Department. However, in the last couple of days, something seems to have broken in her department,” the embassy said, in a statement to RT.

“We hear a stream of ‘fake news’ – about Russia’s atrocities against the peaceful population of East Ghouta, about the gas ‘heroism’ of [Ukrainian President] Poroshenko, and sincere joy over the Oscar award to the story about the inventor of an alcohol doping-cocktail.”

The embassy has been particularly concerned by the “disinformation” surrounding a possible meeting between Russian Foreign Minister Sergey Lavrov and his US counterpart Rex Tillerson.

“Our relationship with Russia is not at a point where it looks like it is going to be normalized anytime soon,” Nauert said on Tuesday, during a press briefing, claiming that Tillerson never received an invitation from Russian officials to meet with Lavrov during his five-day tour in Africa this week, during which both officials will be in Ethiopia at the same time on March 9.

The Russian Embassy argued that Moscow had sent a request for a possible meeting to the State Department on March 2. In its statement to RT, the embassy emphasized that this would be a great opportunity to discuss a range of accumulated issues on regional and global agenda “not through the press, but directly.”

“In any case, we congratulate Nauert and, of course, all female employees of the State Department on International Women’s Day!” the embassy cheerfully added.