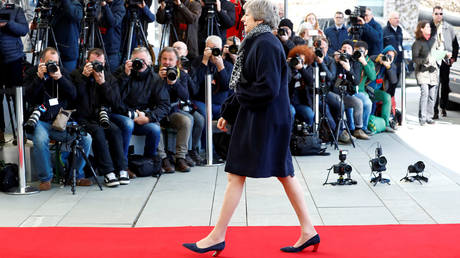 British Prime Minister Theresa May’s arrival in Berlin for (yet another) round of Brexit talks on Tuesday got off to an awkward start when she emerged from her car and found Chancellor Angela Merkel had not shown up to greet her.

The uncomfortable moment didn’t go unnoticed by the UK media, with BBC Berlin correspondent Jenny Hill pointing out on Twitter that Merkel normally waits on the red carpet to greet guests — but was nowhere to be found when May stepped out on Tuesday.

The video shows May awkwardly walking alone along the red carpet, having realized that no one bothered to officially welcome her.

The snub will surely be taken as a sign that EU leaders are growing tired of the merry-go-round of May’s Brexit negotiations that have failed to reach any conclusion for months on end.

Have you ever turned up early somewhere and the host’s not ready for you? 🤦‍♀️

Every cloud has a silver lining, though. This time May was actually able to get out of her car. The last time she visited Berlin, in a real-life metaphor for Brexit itself, she got stuck and was unable to open the door. At least Merkel was waiting on the red carpet that time, though.


May is in Berlin to convince EU leaders to grant a second delay to Brexit after the British parliament repeatedly failed to back her withdrawal agreement, leaving Britain in limbo just three days before the official April 12 exit date. The trip has humiliatingly been dubbed the “begging tour” by some in the German press.

Just in case there’s any doubt how reduced British power is now perceived in Europe, this is from Spiegel this morning: “Weak May on a begging tour.” pic.twitter.com/fzfkVaA0aX

EU leaders are set to meet in Brussels on Wednesday for another emergency Brexit summit, where they will make a decision on a second delay. May will travel on to Paris later on Tuesday to meet French President Emmanuel Macron, where she will likely be hoping to receive a warmer welcome.