A Silicon Valley pastor has resigned after a series of tweets he made slating the tech industry’s social justice posturing and calling the city of Palo Alto an “elitist s**t den of hate” were made public.

Gregory Stevens’ now-deleted tweets were made public at a hearing of the Palo Alto City Council, where his church, the First Baptist Church of Palo Alto, had been seeking approval to lease its space out as a community center.

In the foul-mouthed tweets, Stevens called the city “disgusting,” its social justice Earth Day activism a “f***ing joke” and the city’s police force “pigs.” He also mocked Mormons, the elderly and Beyoncé. Concerned residents argued that a man like Stevens was unsuitable to oversee a community center.

Stevens, whose church was a liberal and LGBT-inclusive organization, resigned in order to deflect negative publicity away from the church. In a statement, he explained: “I tweeted to vent my frustration, and I acknowledge that I did so in an unprofessional and often hurtful way. My Twitter community has always been a small group of progressive ministers and Leftist political activists to whom my rants were geared.”

In his 623-word statement emailed to the San Francisco Chronicle, Stevens said that he was frustrated with the city’s wealth inequality.

“In my experience of trying to work with this community for almost 3 years, I believe Palo Alto is a ghetto of wealth, power, and elitist liberalism by proxy, meaning that many community members claim to want to fight for social justice issues, but that desire doesn’t translate into action,” he wrote.

Stevens had moved to California from his native Florida to study theology, and he began working in Palo Alto in 2015. There he became frustrated with the greed of the tech industry and the city’s widening gap between the impoverished and the mega-rich.

“The tech industry is motivated by endless profit, elite status, rampant greed, and the myth that their technologies are somehow always improving the world,” he said, adding: “The insane wealth inequality and the ignorance toward actual social justice is absolutely terrifying.” 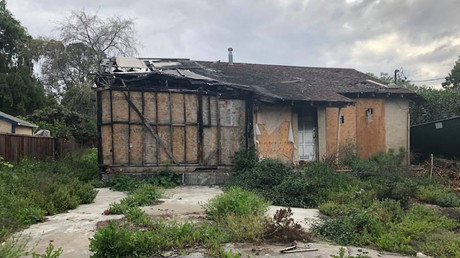 House prices in Palo Alto are among the highest in the country, and despite Silicon Valley being home to dozens of Forbes 100 companies and attracting one-third of all venture capital investment in the US, low-income workers are being forced to sleep in their cars or commute to work from further and further away. Four of the top 10 US cities for homelessness are located in California.

“Jesus was a homeless Jew who said it was harder for a rich man to enter the Kingdom of Heaven than for a camel to get through the eye of a needle,” Stevens wrote. “It is very difficult to do Christian ministry, a ministry that calls us to fight with and for the poor and marginalized among us, in the midst of an enclave of wealth and power.”

Stevens blamed the tech sector for much of the region’s ills. He argued that Facebook has destroyed the historically black neighborhood near its Menlo Park headquarters, moving in highly-paid tech workers and setting off a wave of evictions and gentrification.

“The working class does not benefit from these ‘advances,’ but cook, clean, and baby sit rich babies before heading off to home on long hours of public transit,” he wrote.

Before his Twitter rant was exposed, Reverend Stevens was also thinking of packing his bags and moving out of the city he so despises.