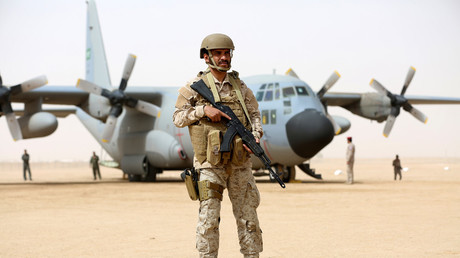 The UK has come under fire for failing to criticize a reported deadly airstrike by Saudi Arabia-led forces on a wedding party in Yemen. Anti-arms campaigners denounced the government’s ongoing Saudi weapons sales.

According to Khaled al-Nadhri, a leading health official, the majority of the 20 dead were women and children. The crowd had gathered in a tent for the wedding in the district of Bani Qayis, reports the Independent. Hospital chief Mohammed al-Sawmali says 46 people who were injured in the attack, including the groom, were brought to the local al-Jomhouri hospital to receive treatment.

Many on Twitter have questioned why there has not been any response from the UK government to the latest reports of civilian deaths in Yemen, orchestrated by Saudi Arabia. Andrew Smith of Campaign Against Arms Trade (CAAT) notes the Saudis have bought “£4.6 billion [US$6.4 billion] worth of arms” from the UK since March 2015. The UK government has been quick to criticize other reported attacks on civilians, including those in Syria.

If #Assad had done this Britain would condemn this as a war crime but as these deaths were caused by Saudi Arabia who we make make billions from by selling them weapons of death, it’s just a regrettable incident. https://t.co/RSY3rAS8KD

In Yemen today, the Saudis bombed a wedding, killing at least 20 people, including the bride. They killed “mostly women and children.” The US & UK – who some believe do humanitarian interventions – both play vital roles in the Saudi destruction of Yemen https://t.co/496jXAigq7

Will @theresa_may make a statement on behalf of the British people, condemning the slaughter of many women and children killed by a Saudi air strike in the last 24 hours on a Wedding party in #Yemen ? I know we have a new #RoyalBaby but …come on… priorities.

Another day, another Yemeni wedding party hit by Saudi-led precision bombers. Mostly women and children killed. Third strike on Yemeni civilians since the weekend. All with US/UK/French arms and support. https://t.co/vT7YPDpH11

CAAT has released a statement in response to Sunday’s alleged bombing of the wedding in Northern Yemen, where it appeared to question Prime Minister Theresa May’s justification for continuing arms sales to a country that UN officials accuse of committing war crimes, and which is said to be responsible for most of the killings in Yemen, where over 10,000 people have died in the conflict so far.

READ MORE: Boy clinging to his dead father won’t become face of Yemen war for millions in the West (GRAPHIC)

The CAAT statement reads: “Yemen is now in its fourth year of war, and the bombardment is getting worse. Thousands have been killed, and many more will be if it continues. Theresa May has said she wants the UK to play a positive role on the world stage, so why is her government still arming and supporting Saudi atrocities? It’s time for her to put the lives of Yemeni people above the interests of arms companies.”

A spokesman for the Saudi-led coalition has responded to the incident, saying: “We take this report very seriously and it will be fully investigated as all reports of this nature are,” reports Reuters.