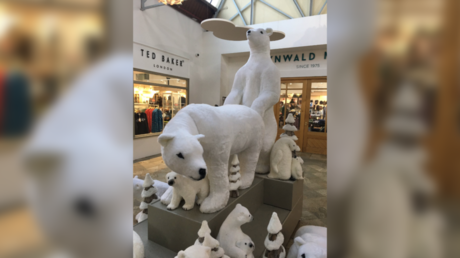 A life-size yuletide polar bear display has become the source of mirth and merriment on the Isle of Man after pranksters arranged the fake animals into a suggestive NSFW pose.

Shoppers were treated to a lot more than they bargained for when visiting the island’s Tynwald Mills shopping mall on Sunday after the lewd reshuffle.

“I completely understand some people may have been offended by the display and the bears had to be told to refrain themselves however I thought it was hilarious and harmless for the short time they were allowed to play mummy and daddy,” shopper Sharon Leggate wrote on Facebook.

However, judging by the online response, few – if any – shoppers actually complained about the pseudo-pornographic polar display.

“That’s a shame!! You should have left it, I thought it was a clever idea to get people up to see it and shop!!” Kerry Pledger wrote in response to the mall.

READ MORE: ‘Fake news’ for a good cause? Viral polar bear video not what it seems

“Perhaps a little X-Rated for some! – the polar bears have had a talking to, and our severe case of ‘Night at the Museum’ hopefully won’t repeat itself!” Tynwald Mills replied.

Others took the opportunity to showcase their pub quiz knowledge a little bit: “I am deeply offended: Polar bears AND Penguins in the same display! Shame on you,” wrote Jens Christian Rifbjerg Larsen, tongue firmly in cheek.

In a sign of good-natured humor, the mall staff even unveiled a new member of the polar bear family following all of social media hubbub.

“It’s a Christmas miracle! This little guy showed up at Tynwald Mills this morning!” the staff wrote. “He’s a mighty 4st 3lbs, and mum is doing well.”