Sharat G. Lin, in addressing the International Anti-war Anti-nuke Rally in Hiroshima held on August 5, 2018, offered a resolute apology for the U.S. government’s dropping of the atomic bombs on Hiroshima and Nagasaki in August 1945. He called it a “monstrous war crime” that must never be allowed to happen again. He called for universal nuclear disarmament that must focus first on the U.S.A. and Russia. 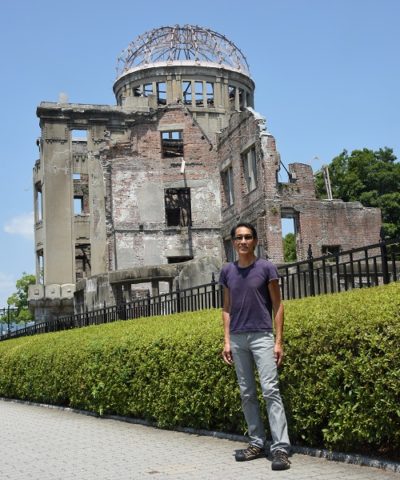 On the 73rd anniversary of the infamous U.S. dropping of the atomic bomb on Hiroshima, there are many memorials, rallies, and marches taking place in Hiroshima, both official and those organized by grassroots peace and justice activists. Sharat G. Lin, representing the San José Peace and Justice Center, addressed the International Anti-war Anti-nuke Rally at the East Ward Cultural Center in Hiroshima held on August 5, 2018.

In calling the U.S. dropping of the atomic bombs on Hiroshima and Nagasaki “monstrous war crimes,” he offered an apology from the people of the United States to the people of Japan for “the most concentrated instantaneous mass killing in human history.” He called for universal nuclear disarmament starting with the U.S.A. and Russia, which have by far the largest nuclear weapons arsenals, rather than focusing exclusively on North Korea and Iran, of which neither have started any wars in the last century.

The full text of his speech follows:

It is truly an honour to be…