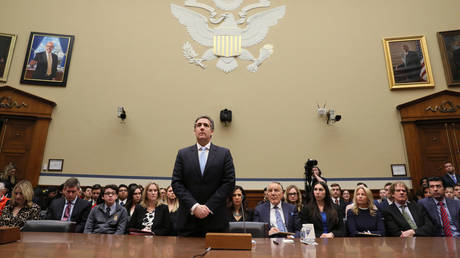 Donald Trump’s former attorney Michael Cohen appeared before Congress on Wednesday to give testimony related to alleged “collusion” between Trump and Russia — but the hearing quickly descended into a partisan political “circus”.

The hearing had barely begun before Republican congressman Mark Meadows tried to put a stop to it, announcing in a “point of order” that it should be postponed because Cohen’s prepared testimony was not handed over 24 hours in advance. Lawmakers were upset that media got the testimony before them.

Cohen hearing kicks off. Meadows throws sand in the gears early, motioning to postpone it due to lack of time to view the testimony. Chairman Cummings refuses. Jordan complains that CNN had the testimony earlier. Meadows demands a recorded vote on his motion.

And so it begins.

Republicans were also quick to point out the attendance of former advisor to Hillary Clinton and Democratic strategist Lanny Davis, who is now working for Cohen, saying that his testimony was really about getting revenge for Clinton after she lost the 2016 election to Trump.

Cohen is a convicted liar and his attorney Lanny Davis is a Clinton sycophant let the sideshow begin…..

When events finally got underway, Cohen immediately apologized for previously having lied to congress to “protect” Trump, saying that he had lied but was “not a liar” — a comment which unsurprisingly didn’t go down well with Republicans on the committee.

Republican Rep. Jody Hice to Cohen: “If you lied, you are a liar, by definition.”

If you repeatedly lied about something, acknowledged that you were lying about it, and then tell the world you are now telling them the truth about it, are you lying again? I guess that’s the metaphysical issue of the day.

Republican Rep. Jim Jordan was the first to question Cohen and wasted no time before attacking his credibility, saying he was a “convicted perjurer” not to be trusted, and accusing him of holding a grudge against Trump because he “didn’t get a job” at the White House — an accusation which Cohen swiftly denied (and which Jordan repeatedly refused to accept).

Jordan and Cohen later got into another heated verbal exchange, with Cohen telling Jordan “shame on you” and accusing him of trying to misrepresent his statements.

Next up to question Cohen was Rep. Debbie Wasserman-Schultz, possibly best known for being forced to resign as the Chair of the Democratic National Committee (DNC) when leaks revealed that she had been helping to fix the 2016 Democratic primary in favor of Hillary Clinton.

Wasserman-Schultz’s questioning of Cohen about whether Trump had “advance knowledge” of DNC leaks (which revealed her own wrongdoings) was met with cries of “hypocrisy” and elicited laughs on Twitter when she referred to “Rump” instead of “Trump.”

Matters then moved on to whether or not Trump was racist, with Cohen claiming that he is indeed racist and is “even worse” in private.

“He once asked me if I could name a country run by a black person that wasn’t a “shithole,” Cohen said.

Republicans jumped to Trump’s defense here, with Meadows even asking a black Trump staffer to stand up in order to prove that the president couldn’t be racist — a tactic which was met with more cries of racism on Twitter, many accusing Meadows of using the woman as a “prop.”

Cashing out on ‘enigma’ Trump

Meadows continued to be one of the the stars of the show, later making a criminal referral on Cohen for possible illegal lobbying activities. Republicans pressed Cohen on his lobbying work and contracts with foreign companies who paid him huge fees for access to the Trump administration, including a Kazakhstan bank and Novartis, which Meadows said paid Cohen for his knowledge “of the enigma that is Donald Trump.”

It didn’t take long for Cohen to get himself caught up in more illegal activities that he could be prosecuted for by the DOJ. pic.twitter.com/HiiqOAq0KD

Mr Meadows : “Did you get money from Kazakhstan bank?”

At one point, during an exchange between Republican Rep. Virginia Foxx, Cohen refused to rule out signing any book, TV or movie deals based on his experiences working with Trump. Cohen answered simply: “No.” He also refused to rule out running for political office in New York.

During the hearing, Stormy Daniels — the woman who claims to have had an affair with Trump in 2006 — also popped up on Twitter, tweeting two words: “Thank you.”

It’s likely Daniels’ gratitude was directed at members of Congress questioning Cohen, given she has previously accused the attorney of threatening her and pressuring her into a non-disclosure agreement about her alleged relationship with Trump.

The media, for its part, was enthralled by the entire display, describing Cohen’s testimony as “explosive” despite the fact that little new was revealed. ABC’s George Stephanopoulos even likened the hearing to testimony given by former president Richard Nixon’s lawyer John Dean during the Watergate scandal.

Cohen hit back at Republicans for defending the president and said that he was partly responsible for their “silliness,” having dedicated ten years of his own life to “blindly” defending Trump.

Cohen: “I’m responsible for your silliness because I did the same thing that you’re doing now for ten years. I protected Mr. Trump…I can only warn people the more people that follow Mr. Trump as I did blindly are going to suffer the same consequences that I’m suffering” pic.twitter.com/smNHbWzmVK

Throughout the hearing, Democrats went easier on Cohen than Republicans, hoping that he could provide any shred of evidence to prove their allegations of collusion with Russia, but Cohen could provide none.

Freshmen Republican representative Carol Miller tried to shame her colleagues for “wasting time” focusing on Cohen instead of discussing important issues like “border security” and called the hearing a “circus.”

She was immediately reminded by social media users that circus-like hearings and time-wasting is just business as usual on Capitol Hill.

Republicans were majority for two years & yet we have not had any hearings on Puerto Rico, Immigrant Children separated and died, & US Soldiers killed in Niger pic.twitter.com/EuoD1CXYzw