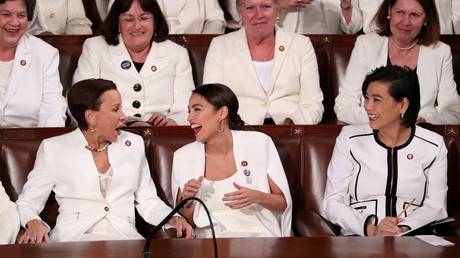 Rep. Alexandria Ocasio-Cortez, a self-professed democratic socialist and rising star in the Democratic Party, has dismissed Donald Trump’s anti-socialist proselytizing during his State of the Union speech as a sign of weakness.

“I thought it was great. I think he’s scared,” the rookie New York Congresswoman told reporters when asked about the president’s remarks about the dangers of socialism. “He sees that everything is closing in on him and he knows that he’s losing the battle of public opinion.”

The jibe came shortly after Trump argued that “socialism” was not compatible with American values.


“We are alarmed by the new calls to adopt socialism in our country,” Trump said during his State of the Union address, eliciting boos from business-friendly members of Congress. “America was founded on liberty and independence, and not government coercion, domination, and control. We were born free and we will stay free.”

Among a boisterous standing ovation (Trump’s anti-socialist manifesto even inspired Democratic House Speaker Nancy Pelosi to break out into applause), the camera zoomed in on unabashed socialist Senator Bernie Sanders from Vermont, who appeared to be deeply unamused by the president’s utterances.

The verbal broadside reveals that Trump has no “substantive proposals to counter” her ideas and that he lacks “vision” for the United States, Ocasio-Cortez, the 29-year-old who in November became the youngest woman ever elected to Congress, said. Her colleague, Rep. Pramila Jayapal (D-Wash.), a co-chair of the Progressive Caucus, argued that the group’s proposals – including increasing the marginal tax rates on the country’s wealthiest households – were long overdue reforms that would strengthen, not threaten, America.

“I think he’s, you know, he’s worried about the good ideas like Medicare for all and taxes on the wealthiest and a green new deal and he wants to paint it as socialism,” she told reporters.

“I mean look, for me I think a lot of people don’t understand it (socialism). I mean the library and the post office is socialism — so many of the things that we have in our country that we all value is very much based on those values of equality,” she said.