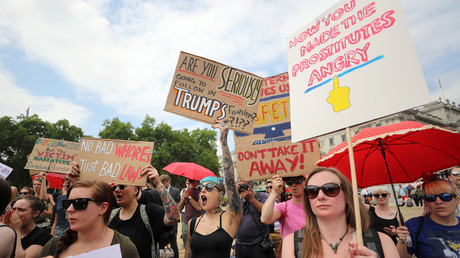 Scores of British sex workers and rights activists have staged a protest outside Parliament against what they say is a “Trump-inspired law” as the MPs debated a new proposal calling to ban sex worker’s advertising platforms.

Hello. Its @SexWorkHive here. We usually Takeover Neville’s account Mondays from 7-9pm…
However today we protested against an important debate in Parliament that could decide to remove online platforms within the sex industry inspired by SESTA/FOSTA. #letussurvivepic.twitter.com/Xqk8y3dObE

The measure on tackling the demand for commercial sexual exploitation was debated by British lawmakers on the same day, with Labour politician and MP for Rotherham Sarah Champion leading the discussion. Lawmakers insist that sex work advertising platforms, and Vivastreet or Adultwork in particular, contribute to sexual exploitation.

Champion argues that “prostitution is a form of violence against women and girls” and calls to extend the Nordic Model or Sex Buyer Law to the whole UK territory. The approach aims to make paying people for sex a criminal offence and was already adopted in Sweden, Norway, Iceland, Northern Ireland, Canada, France, and Ireland.

However, the critics of the proposal argue that criminalization of the sex industry would only jeopardize them and “empower exploiters” and make“it much harder for sex workers to survive.” At the same time activists stressed that the proposal is simply mirroring US President Donald Trump’s Stop Enabling Sex Traffickers Act (SESTA) and Fight Online Sex Trafficking Act (FOSTA) designed to fight sex trafficking by reducing legal protections for online platforms.

“These proposals would make it more difficult for sex workers to screen clients, and share information about dangerous clients among themselves, or to connect with each other for support,” the ECP statement read.

The lawmaker’s debate came shortly after a cross-part parliamentary group issued report titled ‘Behind Closed Doors’. It revealed that classified sites such as Vivastreet and AdultWork are used by traffickers to control the profiles of sex workers and generally enable sexual exploitation in the UK.