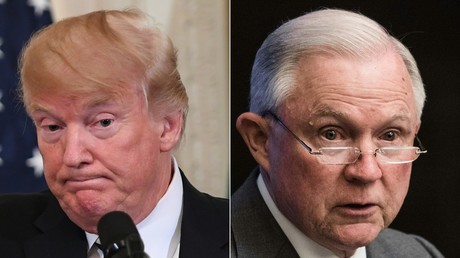 “This is a terrible situation and Attorney General Jeff Sessions should stop this Rigged Witch Hunt right now, before it continues to stain our country any further,” Trump tweeted on Wednesday.

..This is a terrible situation and Attorney General Jeff Sessions should stop this Rigged Witch Hunt right now, before it continues to stain our country any further. Bob Mueller is totally conflicted, and his 17 Angry Democrats that are doing his dirty work are a disgrace to USA!

Trump called Mueller’s team of investigators “17 Angry Democrats,” accusing them of bias in favor of the Democratic party.

The president also lashed out at FBI agent Peter Strzok. He worked on the agency’s investigation of Hillary Clinton’s email server misuse, as well as the investigation into allegations of collusion between the Trump campaign and Russia in the run-up to the 2016 election.

While working on the investigations, Strzok shared anti-Trump text messages and emails with his colleague and lover, FBI lawyer Lisa Page. In one message, Strzok vowed to “stop” Trump becoming president. In June, a report by the Justice Department’s Inspector General found that the texts “potentially indicated or created the appearance” of bias, but concluded any anti-Trump bias had no significant impact on decisions in the Clinton email investigation.

“FBI Agent Peter Strzok (on the Mueller team) should have recused himself on day one. He was out to STOP THE ELECTION OF DONALD TRUMP. He needed an insurance policy. Those are illegal, improper goals, trying to influence the Election. He should never, ever been allowed to……..

…..remain in the FBI while he himself was being investigated. This is a real issue. It won’t go into a Mueller Report because Mueller is going to protect these guys. Mueller has an interest in creating the illusion of objectivity around his investigation.” ALAN DERSHOWITZ….

The trial of former Trump campaign manager Paul Manafort began in Virginia on Tuesday. While Manafort was indicted by Mueller, he is not charged with any crimes relating to supposed collusion with Russia. Instead, Mueller is pressing him on tax and bank fraud charges dating back over a decade.

President Trump pointed to Manafort’s extensive history of lobbying, and called his indictment in the ‘Russiagate’ investigation a “hoax.”

Paul Manafort worked for Ronald Reagan, Bob Dole and many other highly prominent and respected political leaders. He worked for me for a very short time. Why didn’t government tell me that he was under investigation. These old charges have nothing to do with Collusion – a Hoax!

The Mueller investigation has been ongoing for more than a year, and has thus far brought no charges over allegations of collusion between the Trump campaign and Russia. In that time, its focus has shifted away from collusion, to looking for evidence that Trump and his team obstructed justice. Mueller’s team recently informed Trump’s lawyers that they are considering combing through the president’s 38,000 tweets for evidence of obstruction.