Cohen, who once said that he would take a bullet for Trump, has now flipped and claims that Trump directed him to “commit a crime” by ordering the payment. Trump denies ordering Cohen to break the law and says that the money came from his own fortune, not the campaign account. Trump accused Cohen of “making up stories” to get a better plea deal.

Regardless, Senator Grassley is interested in following Cohen’s claim up and has reached out to Cohen’s attorney, Lanny Davis. “We have reached out to Lanny Davis but we have not heard back,” the Iowa senator told Bloomberg.

Grassley’s committee had been trying to reach Cohen since May, which was canceled due to Cohen’s ongoing criminal proceedings. Senator Lindsey Graham – (R-South Carolina), another Judiciary Committee member – is still reluctant to investigate Cohen’s claims, as Cohen has yet to be sentenced. 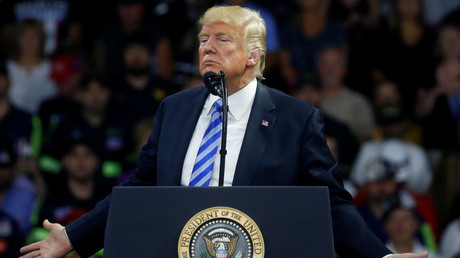 “I’ve been very consistent about this, I don’t want to cross paths with ongoing criminal investigations,” Graham said.

Cohen also revealed through Davis on Wednesday that he has information that might be of interest to Special Counsel Robert Mueller, charged with investigating alleged collusion between the Trump campaign and Russia in the runup to the 2016 election.

However, a series of television appearances by Davis on Wednesday have raised doubts as to the reliability of any evidence Cohen might have. Speaking to CNN, Davis directly denied Cohen’s earlier claims to the network that Trump had advance notice of a meeting between his son, Donald Jr., and a Russian lawyer at Trump Tower in 2016.

“So Michael Cohen does not have information that President Trump knew about the Trump Tower meeting with the Russians beforehand or even after?” host Anderson Cooper asked Davis.

“No, he does not,” Davis replied, adding that the earlier CNN report had gotten “mixed up.”

When the CNN story broke late June, Trump rubbished it, and like this week, accused Cohen of “trying to make up stories,” again to get out of his own legal troubles, a tax evasion case involving a former business partner in the New York taxi business.

After denying Cohen’s Trump Tower ‘bombshell’, Davis threw water on another smoking gun touted by some Democrats as evidence of collusion: the Steele Dossier. Compiled by opposition research firm Fusion GPS at the behest of the Democratic National Committee, the dossier was a poorly sourced and unverified collection of allegations against Trump and his campaign team.

Among other things, the Dossier claimed that Trump hired two prostitutes to urinate on him in a Moscow hotel room, when then-businessman Trump visited the Russian capital in 2013. Davis told Bloomberg that in this dubious dossier, at least 13 allegations against Cohen alone were false, including one claim that Cohen traveled to Prague in 2016 to meet with Russians and facilitate a “clandestine” conspiracy between Trump and Russia.

“Thirteen references to Mr. Cohen are false in the dossier, but he has never been to Prague in his life,” Davis told Bloomberg.

Bad reporting, bad information and bad story by same reporter Peter Stone @McClatchyDC. No matter how many times or ways they write it, I have never been to Prague. I was in LA with my son. Proven! https://t.co/ra7nwjUA0X

One thing that Davis was equally certain about is that Cohen needs money. After teasing the possibility that Cohen might have some juicy details for Mueller, Davis asked viewers to reach into their pockets and help the disgraced fixer “continue to tell the truth” about Trump by contributing to a crowdfunding campaign. Of course, this money would also go towards helping Cohen “pay his legal fees.”