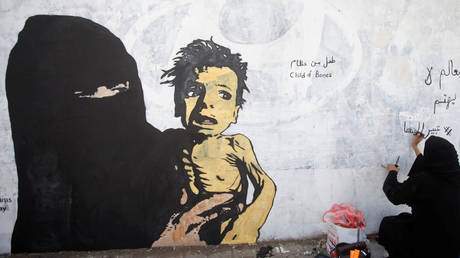 Senate Republicans have dodged another effort to end US support of the Saudi-led war in Yemen, ruling that an unrelated amendment added to the bill in the House allows majority leader Mitch McConnell to block the vote.

Language condemning anti-Semitism, tacked on as an amendment in the House before the Yemen War Powers bill was due to pass, is “not germane” to the content of the bill, the Senate parliamentarian ruled, stripping the bill of its “privileged” status and allowing McConnell to quash the scheduled vote.

Senators are planning to force a vote on a “clean” version of the bill, absent the anti-Semitism amendment, which House Republicans rammed through at the last minute in the wake of Rep. Ilhan Omar’s controversial tweets about the Israeli lobby. The streamlined bill, written by Sen. Bernie Sanders (I-VT), Sen. Chris Murphy (D-CT), and Sen. Mike Lee (R-UT), retains privileged status.


But there’s nothing to stop House Republicans re-adding the anti-Semitism amendment after the Senate vote, which would trigger another parliamentarian ruling and scuttle the legislation further – unless Democrats vote “no” on the amendment, which would set them at odds with the Israeli lobby that so recently savaged their colleague.

Congressional Republicans are old hands at using procedural manipulations to keep the US bankrolling the unpopular Saudi war; a Yemen War Powers resolution that made it through the Senate in December was blocked from a House vote when Republicans appended a rule change unrelated to the bill.


The US has funded, trained, and equipped the Saudi-led coalition to wage their brutal war against the Houthis in Yemen, creating what the UN has deemed the worst humanitarian crisis of the 21st century. More than 14 million Yemenis exist in “pre-famine conditions,” dependent on food aid for their survival, while Saudi airstrikes have deliberately targeted hospitals and civilian infrastructure, leading to widespread disease and suffering, including the world’s largest cholera outbreak. Upwards of 80,000 Yemenis have been killed in the violence since hostilities began in 2015, while Save the Children estimates over 85,000 children have died of starvation.