The tax bill passed the Senate on Wednesday, by a vote of 51-48, but the bill won’t go to the president’s desk to be signed until the House corrects three provisions in their own tax bill that broke Senate rules.

The US Senate voted to pass their version of the Tax Cuts and Jobs Act after a 10-hour time frame was afforded to the chamber to debate the bill. 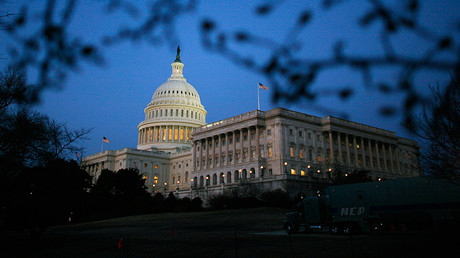 Its passage follows Vice President Mike Pence’s decision to cancel a trip to the Middle East, in case he was needed to break a voting tie to push the legislation through the upper chamber.

The US House of Representatives must now change three provisions it included in their own bill they voted to pass Tuesday, which did not adhere to Senate procedural rules.

The vote took place with a heavy US Capitol Police presence outside the chamber.

Protesters chanting “Kill the bill, don’t kill us” interrupted the Senate vote on passage of the tax bill early Wednesday, AP reported. Vice President Mike Pence, who was presiding, was forced to stop, repeatedly calling on the sergeant at arms to restore order.

Protesters interrupted the House debate on the bill earlier in the day.

The three problematic provisions in the House bill relate to using educational savings accounts for homeschooling, and also deal with private endowments from universities, Reuters reported.

The offending provisions were called out after they violated the so-called Byrd Rule, which states that any proposed legislation going through the budget reconciliation process – the way the tax bill is – can be blocked due to the measure containing “extraneous matter” or anything “merely incidental” to the federal budget.

The House will vote on their bill again Wednesday, and if it passes, it will be sent to President Donald Trump’s desk to be signed into law. Both the Senate and House bills must fully align when passed individually in each chamber, before being sent to the president.

After the minor setback, Republican Senator John Kennedy of Louisiana talked to MSNBC about the mistake in the House version of the bill.

“Listen, people screw up. A member of the staff screwed up. It’s not the end of Western civilization. We have the votes today; we’ll have them tomorrow,” Reuters reported.

White House legislative affairs director Marc Short also commented on the provisions which led to a new vote in the House and said: “I don’t think it’s that uncommon for a big piece of legislation like this,” Reuters reported.

The Tax Cuts and Jobs Act making its way around both chambers in congress is the largest proposed tax system overhaul in the US in over 30 years.