Gina Haspel is a step closer to becoming the next CIA director after the US Senate Intelligence Committee voted to advance her nomination.

It follows weeks of controversy surrounding her involvement with a post-9/11 torture and detention program, launched under the administration of George W. Bush.

In the closed session vote, Haspel won ‘yes’ votes from 10 of the committee’s 15 members, including all eight Republicans and two Democrats. She was opposed by California Senators Kamala Harris and Dianne Feinstein and three others. Her nomination can now be considered by the full Senate. 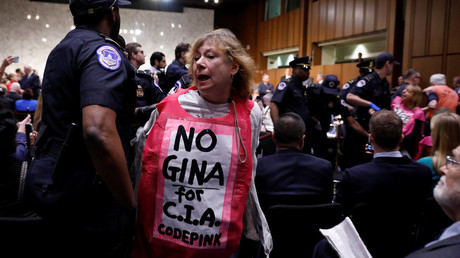 Haspel, who is President Donald Trump’s top pick to lead the spy agency, faced a tough confirmation hearing last week when she was grilled by senators about her time overseeing a “black site” in Thailand where detainees were subjected to brutal torture methods, including waterboarding. She was also questioned about her role in the destruction of tapes showing those interrogation sessions.

During the hearing, Haspel tried a number of times to dodge direct questions about her attitude to torture and was criticized by New Mexico senator Martin Heinrich for giving “legalistic” answers to straight-forward questions.

In the days leading up to the vote, it was unclear whether Haspel would have the support she needed from Democrats on the committee. However, a letter sent by Haspel to top committee Democrat, Virginia Senator Mark Warner, seems to have sealed the deal for Trump’s nominee.

As someone who has closely watched and reported on DC Democrats for years, seeing them spend a year parading around as “Resistance” warriors – only to watch them ensure Trump’s choice of a torturer be confirmed as CIA chief – is the opposite of surprising https://t.co/xPv6nQyF6phttps://t.co/QzOKsSpRFt

In the letter, seen as an attempt to sway undecided Democrats, Haspel condemned the CIA’s past torture program and said the decision to begin such a program “is not one the CIA should have undertaken” and promising not to restart any torture program at the agency.

The admission seems to have eased the worries of Warner who announced he would back Haspel’s nomination hours after she sent the letter claiming that torture was now contrary to her “moral and ethical values.”

West Virginia Senator Joe Manchin was the first Democrat on the committee to say he would support Haspel’s nomination. Haspel has also seen public support from a number of Democratic senators not on the committee, including Indiana Senator Joe Donnelly, North Dakota Senator Heidi Heitkamp and Florida Senator Bill Nelson. That support means she is all but sure to be confirmed as director of the CIA when the full senate votes.

Here are the 5 Democratic senators (thus far) who have made clear they don’t give a shit about accountability for torture and instead have announced their support of Gina Haspel for CIA director: Mark Warner, Heidi Heitkamp, Bill Nelson, Joe Manchin and Joe Donnelly.

Two Republicans in the Republican-majority Senate have said they oppose Haspel’s nomination, but one of the no votes comes from Senator John McCain who is battling brain cancer and will not be in Washington to vote.

When pushed during her confirmation hearing, Haspel admitted that she is the person making decisions about which documents and information to release about her history with the CIA.

The full senate is expected to vote on Haspel’s nomination next week.