A supermarket security guard who was sacked after being accused of stealing has climbed into the rafters of his former workplace and launched a one man protest against his unfair dismissal.

Adama Jammeh has been Facebook Live streaming from his perch above the checkout desks for more than 18 hours.

Jammeh, 46, told the BBC he is “stressed and angry” after being accused of stealing £20,000 worth of electrical goods from the supermarket giant. 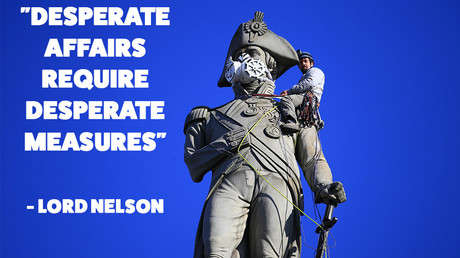 He protested outside the Portman Road store with banners for the past six months after being sacked by security firm Total Security Services (TSS).

Police are at the scene outside the Tesco Extra, which remains closed after being evacuated at about 6:00pm BST on Thursday, when the man started “yelling” from the ceiling.

He shouted: “If Tesco think I’m going to walk away from this, they’ve got another thing coming.”

He said he refuses to halt his protest unless Tesco bosses apologize and “pay lost earnings,” the BBC reports.

His wife Dawn, who has been standing outside the building in support of her husband, said: “He’s been wrongfully accused of stealing.

“Police went through CCTV which took them 10 months to go through and said he was an innocent man and that it was somebody else,” she told the BBC.

Thames Valley Police is yet to respond to claims of Jammeh’s innocence.

TSS has been reached for comment, while the store’s management is attending outside but has until now refused to comment.

A Tesco spokeswoman said they believed the man had not been directly employed by Tesco but was a member of security staff.

A statement said: “We’re aware of an incident at our Reading West Extra store and are assisting police with the matter.”