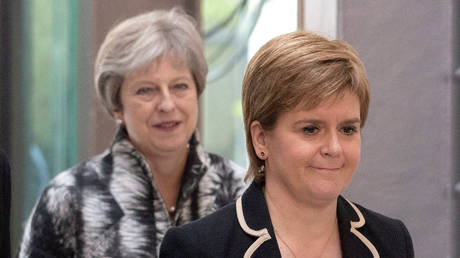 Scottish First Minister Nicola Sturgeon says an independent Scotland that remains part of the EU may come back on the table after the crushing defeat of the Brexit deal by the British Parliament.

In a series of tweets posted after Prime Minister Theresa May failed to secure MPs’ support for her EU divorce plan, Sturgeon threatened that Scotland may part ways with the UK rather than face a hard Brexit.

“We want UK to stay in EU which is why we back a #PeoplesVote. But it is becoming increasingly clear that Scotland’s wider interests will only be protected with independence,” she said.

Historic defeat for the PM and it has been obvious for months that it was coming. Enough time has been wasted. It is time to stop the Article 50 clock and put this issue back to electorate. Scotland voted to remain in the EU and we should not be dragged out against our will.

Spoke to PM earlier – not obvious that she has any real idea what to do next. Also not at all clear she is open to any fundamental change of thinking in her proposed cross party talks. The bare minimum she must do now is seek extension of Article 50 to stop the clock.

Off to London to meet with @IanBlackfordMP and @theSNP MPs ahead of no confidence vote in Commons later. We want UK to stay in EU which is why we back a #PeoplesVote. But it is becoming increasingly clear that Scotland’s wider interests will only be protected with independence.

Proponents of Scottish independence last had their chance to exit the United Kingdom in 2014, losing by a 44.7 percent to 55.3 percent margin. But after the UK decided in 2016 to leave the European Union, calls for an independent Scotland were fueled. Unlike the country in general, Scots voted ‘remain’ in the 2016 Brexit referendum.


The 35 MPs from Sturgeon’s Scottish National Party voted ‘no’ during the Brexit deal vote on Tuesday, as did Labour and Liberal Democrat legislators from Scotland, and three Scottish Conservatives.