Theresa May has challenged the Kremlin to explain why a Russian-developed nerve agent was used to attack ex-double agent Sergei Skripal on UK soil. But if she doesn’t like Moscow’s response, what can May actually do about it?

According to the UK PM, Russia has either carried out a “direct attack on our country” or had “lost control of this potentially catastrophically damaging nerve agent” in the poisoning of Skripal, 66, and his daughter, Yulia, 33. She has given Russian President Vladimir Putin a deadline of midnight on Tuesday to account for Russia’s actions, adding: “Should there be no credible response, we will conclude that this action amounts to an unlawful use of force by the Russian state against the United Kingdom.”

This would enable the UK government to invoke Article 51 of the United Nations charter, which allows for legitimate self-defense, and potentially providing the legal basis for an offensive against Russia. So, aside from declaring all-out war on the Kremlin, what can she actually do to pull ‘rogue-state’ Russia into line?

Britain could expel Russian diplomats, which would likely lead to further decay in the Kremlin’s relationship with the UK. Russian diplomats were also expelled from Britain following the poisoning of former Russian Federal Security Service operative Alexander Litvinenko with radioactive polonium in 2006.

Would football suffer if perennial tournament bottlers England refused to attend the World Cup? Not many seem to think so, not even England fans.

With England in the spotlight, it’s trying to re-live its glory days of Empire by giving Russia an ultimatum and threatening serve punishment. Ha! Maybe London should boycott the FIFA World Cup in Sochi. Ha! They wouldn’t be missed.

If the UK and other countries wanna hit Russia (Putin) where it hurts, boycott the World Cup.

Russophobes have frequently barked from their soapboxes about RT. In the past, politicians have been directed by their parties against speaking to the network. Multiple articles have been written about how the broadcaster sits in a domineering Westminster tower, pretending to be a real TV station.

Now, with the poisoning of Skripal and his daughter in their arsenal, haters of the TV network are calling on Ofcom regulators to revoke the TV channel’s license. Such a move would likely see the BBC in Moscow ousted by the Russian government… but what many Britons who are whipped up in an anti-Kremlin frenzy seem to be forgetting is that other major media sources are owned by Russian oligarchs.

Critics are conveniently forgetting that the Evening Standard and The Independent are owned by Evgeny Lebedev – the son of an ex-KGB agent and oligarch. Plus, Evgeny is a personal pal of Boris Johnson.

If West Ham fans rioted over a few poor results and the callousness of their porn-baron owners, imagine the scenes if calls to sanction Arsenal and Chelsea are followed through with? Chelsea is owned by Russian billionaire Roman Abramovich, while fellow oligarch Russian-Uzbek billionaire Alisher Usmanov owns a 30.04-percent chunk of Arsenal. Some online, probably Tottenham fans, are calling for these clubs to be boycotted.

Many asking about Chelsea/Abramovich & Arsenal/Usmanov – no indication yet of govt plan to target Russian oligarchs in UK.
United & UEFA egs of football entities sponsored by Russian state firms.
UK yet to confirm Russian state involved in spy poisoning https://t.co/WcrKQu7q3P

I wonder how Chelsea FC feels about all of this Russia business?

4pm fast approaching, what is going to be the UK’s response to Russia’s alleged aggression? Relegate Chelsea FC? /s #RussianSpy#UK

Politics professor at the University of Buckingham, and The Sun’s favorite academic, Anthony Glees, has called for the UK to freeze Russian assets. “We cannot be agents of Russia by allowing them to view the UK as a safe space following an outrage that seems increasingly to lay at Moscow’s door,” he told the Daily Express. 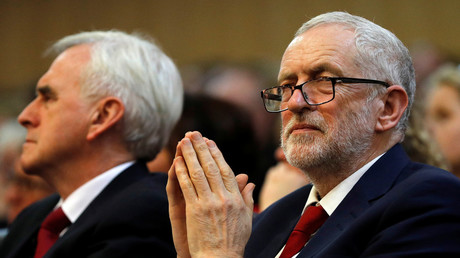 “We must retaliate by seizing all Russian assets, especially in London, but the government must then prepare us for retaliation by Russia. In my view, we will be hit by a cyber-attack in the UK just as we’ve seen in France, Germany, Bulgaria, Ukraine and Estonia.”

Glees only came to prominence last month when he was the only academic cited in The Sun’s attack on Labour leader Jeremy Corbyn. The article, which alleged that Corbyn was a paid Czechoslovakian spy, was lambasted as badly sourced.

This makes sense – the best way to attack another country with a stealthy move like a cyber-attack would be to talk about it. A lot.