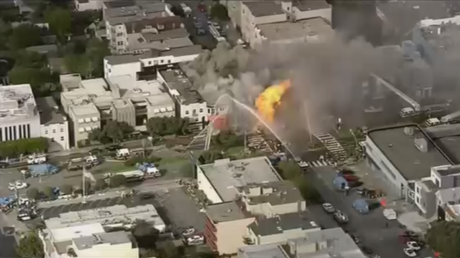 Firefighters in San Francisco are battling a massive blaze caused by a suspected gas pipe rupture and explosion at a construction site. Residents within a one block radius of the incident are being evacuated.

At least five buildings were affected by the blaze, following a gas line explosion near Geary Boulevard and Parker Avenue on Wednesday afternoon. The inferno close to Richmond District reached a third alarm by 1:50pm as fire crews battled to contain it.

The firefighters are trying to keep the fire under control but their efforts are been hindered by the gas which continues to flow through the line, Hayes-White said.

So far no deaths or injuries have been reported. Five workers at the construction site, who were initially reported missing, have now been found.

Plumes of smoke can be seen from blocks away. The public is being asked to stay clear of the area, while evacuations were ordered for a one-block radius around the explosion and fire zone. All traffic in the area has been disrupted, with bus routes diverted away from the accident area.