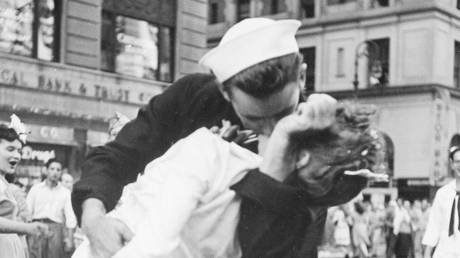 George Mendonsa, the sailor who planted a kiss on a woman in Times Square while celebrating the end of World War II, resulting in the iconic V-J Day photograph, has died at the age of 95.

Mendonsa suffered a seizure at his assisted living facility in Rhode Island, where he lived with his wife of 70 years, his daughter confirmed to the Providence Journal. He was just two days shy of his 96th birthday.

The now-infamous photograph shows Mendonsa kissing Greta Zimmer Friedman on August 14, 1945, the day Japan surrendered to the United States. Since the photographer Alfred Eisenstaedt did not document their identities at the time, multiple people over the years claimed to be the pictured couple until Mendonsa and Friedman were confirmed to be Eisenstaedt’s subjects.

While for years the photograph was seen in a romantic light, it was later revealed that the pair did not even know each other and that Mendonsa had simply grabbed and kissed Friedman, a dental assistant dressed in her uniform, believing that she was a nurse from the war.

Critics of the photograph say it is symbolic of a time when men controlled women and that it even normalized sexual assault and rape culture.

In a 2005 interview, Friedman confirmed that she did not know Mendonsa was going to kiss her. “The guy just came over and kissed or grabbed,” she told the Library of Congress, adding that he was just “really celebrating” but that it was not a “romantic moment.”

Friedman herself died of old age in 2016.