The Russian Embassy has responded to reports in the Times newspaper that claims “concerns are growing” about the Kremlin’s influence in Westminster for the sole, simple reason that British MPs are appearing on RT.

As with any other British media outlet, RT UK invites politicians from across the political spectrum to speak freely on a wide variety of issues. However, the Murdoch-owned, right-wing Times appears to have taken umbrage at this, ‘naming and shaming’ the Tory and Labour MPs who have appeared.

The embassy added: “[Journalist Dominic Kennedy] accuses RT of being one-sided, then tells Tory MPs not to voice their opinion there. Stylish.”

While the Times derides RT as “Putin’s pet TV channel,” it appears to forget its own reputation as a puppet of owner Rupert Murdoch, who stands accused of interfering with British government decisions.

Following the general election in June, which saw Theresa May embarrassingly lose her party’s absolute majority in the Commons, Murdoch faced allegations he had pressured the PM to reappoint now-Environment Secretary Michael Gove to the cabinet, or face bad press in his newspaper titles. 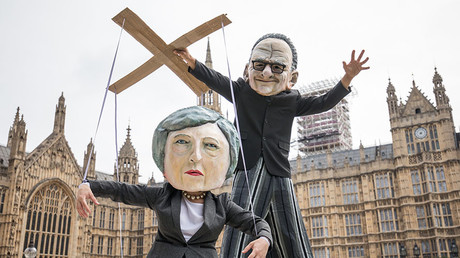 The Tories refused to directly respond to the claims.

Funnily enough, it was Gove who raised his “concern” this week about those MPs appearing on a “literal Kremlin propaganda channel.”

While the newspaper is distressed by any perceived RT “influence,” it has no problem pushing its true-blue agenda. In the lead-up to the general election, Murdoch told his employees at the Sun and the Times that the future of the company was dependent on the Tories winning the election, and told them to be more harsh on Labour leader Jeremy Corbyn, according to reports.

While the Times raises its “concerns” about “Russia’s influence at Westminster” wielded through RT, the newspaper clearly has a very short memory. The 2011/2012 Leveson inquiry into media standards and ethics in the UK revealed that Murdoch had been in close contact with every Prime Minister in recent decades, including Margaret Thatcher, Tony Blair and David Cameron.

The inquiry cast light on the inner workings of the Murdoch empire during the News of the World phone-hacking scandal.

The 168-year-old tabloid was forced to close after it was revealed its journalists had hacked the voicemail of celebrities and VIPs including Prince William, and even of murdered schoolgirl Milly Dowler.