US authorities have “illegally” removed the Russian flag from the residence of the consul-general in Seattle, the Russian Embassy said, urging Washington to return the national symbol back to the diplomatic property’s rooftops.

The Russian flag was removed from the diplomatic compound in Seattle “under the cover of night” on Monday morning in an “illegal” move that serves as yet another example of Washington’s “blatant violation of norms of the international law,” the Russian embassy in the US said in a statement.

Noting that the facility remains a diplomatic property of the Russian Federation, the embassy condemned the “unacceptable treatment” of the national symbol and demanded an “immediate” return of the standard to its “legitimate place” on the flag-post. 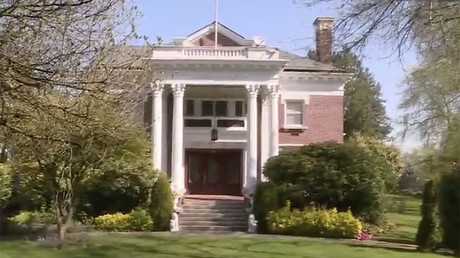 Earlier, the embassy slammed the US officials’ intrusion into the compound, calling it a “hostile takeover” and a gross violation of the conventions on diplomatic and consular relations.

The US State Department spokesman, however, disagreed with the Russian position, explaining to Sputnik that the flag was removed because the residence lost its diplomatic status after the United States withdrew its consent for the establishment and operation of the Russian consular office in Seattle on April 1, 2018.

The Seattle consulate was closed by the Donald Trump administration on March 26 along with the expulsion of 60 Russian diplomats implemented in solidarity with the UK. London is accusing Moscow of a chemical attack against former double agent Sergei Skripal and his daughter, Yulia, in Salisbury on March 4. The UK’s reassurances that Moscow was ‘highly likely’ involved were also enough for Canada, Australia, and most NATO countries to follow the suit, resulting in the expulsion of over 150 Russian diplomats altogether. Moscow retaliated in kind.

The closure of Seattle consulate became the latest in a series of diplomatic reprisals. Expulsions began in December 2016, when outgoing President Barack Obama ordered the seizure of two Russian properties in the US and expelled a number of diplomats, claiming Russia had meddled in the US presidential election. Moscow initially declined to retaliate, hoping to mend relations that soured under the Obama administration. However, when the US Congress overwhelmingly voted in favor of new sanctions against Russia in August 2017, Moscow responded by ordering the US diplomatic mission to downsize. Seeing Moscow’s delayed response as unfair, in September 2017, the Trump administration moved to close the Russian Consulate General in San Francisco, the Russian trade mission in Washington and its branch in New York.

“We demand all the illegally seized Russian diplomatic property in the city of Washington, San Francisco, Seattle, in the states of Maryland and New York to be returned to the Russian Federation,” the Russian Embassy said on Monday.