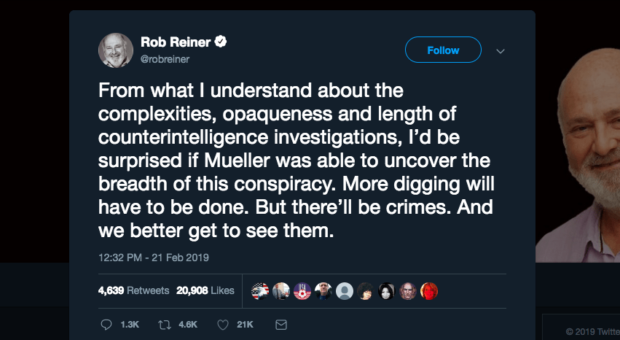 Both CNN and the Washington Post are reporting that Robert Mueller’s investigation into a possible conspiracy between the Trump campaign and the Russian government will be wrapping up as soon as next week. This report comes without a single American having been charged with any such conspiracy during the investigation up to this point, and we’re seeing a very revealing uptick in narrative management from the people who have been making a name for themselves promoting the Russiagate conspiracy theory.

A Washington Post article titled “Mueller’s ‘winding down’ may be less than it appears” by Jennifer Rubin (a member of WaPo’s large lineup of neoconservative empire loyalists) argues that while it is very possible there won’t necessarily be anything earth-shattering in the report itself, “the host of other investigations will continue while the focus moves to Congress.” A New York Times article titled “The Mueller Report Is Coming. Here’s What to Expect.” argues much the same thing. Both articles effectively tell the reader that they should brace themselves for disappointment, but definitely still keep their tinfoil pussyhats on.

“I’VE EXPRESSED SKEPTICISM ON #MUELLER FROM DAY ONE,” tweeted the totally calm and unbothered former Hillary Clinton advisor Peter Daou. “Trump obstructed justice in plain sight and bragged about it to Russian operatives in the Oval Office. THAT’S UNQUESTIONABLY AN INDICTABLE/IMPEACHABLE OFFENSE. If he remains in office, it is an abject failure of our system.”

I’VE EXPRESSED SKEPTICISM ON #MUELLER FROM DAY ONE.