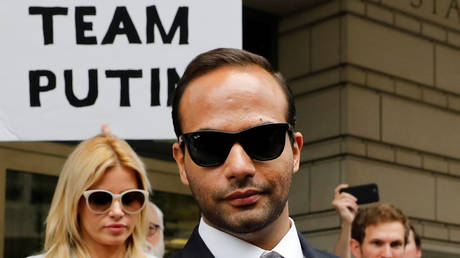 With the Mueller investigation over and the Russiagate DOA, George Papadopoulos, former Trump campaign energy adviser, told RT he hopes the truth about the alleged deep state conspiracy will soon come out.

Lamenting the “disinformation” encircling the Trump campaign and Russia over the past three years, Papadopoulos explains that the only reasons the Trump team ever wanted to work with Russia were to stabilize Syria and Ukraine – and “to assure that Russia and China do not align in this devastating geopolitical alliance which will probably have many unpredictable consequences for the US in Europe and in Asia.”

But they never even got a chance to make any Russian connections, Papadopoulos says, adding that he was contacted by Israeli, Australian, and American intelligence – all of whom were interested in his “high-level connections in the Middle East” – but no Russians.

“It goes to the core of how corrupt the Mueller investigation really was, into supposed Russian interference when no one on the Trump campaign and the transition team was even dealing with Russians,” Papadopoulos said. “I’ve never met a Russian…official in my entire life, and somehow I find myself in the middle of a fake Russian conspiracy!”

The Mueller investigation zeroed in on Papadopoulos’ contact with Joseph Mifsud and Alexander Downer, both of whom the media portrayed as “Russian intermediaries” but whom Papadopoulos believes were working with the FBI, “dropping information in my lap that I did not want regarding Hillary Clinton’s emails in the hands of the Russians.” Papadopoulos even went so far as to report Downer to the FBI “because I thought he was spying on me.”


“The truth is going to be out there” when Trump declassifies the Foreign Intelligence Surveillance Act (FISA) documents, Papadopoulos predicts. “It’s probably going to show the Obama administration, with the aid of both the Australian government and the UK government, were coordinating and laying various traps for the Trump campaign to essentially undermine us and that’s what they did for the last two years.”

Papadopoulos, who calls himself “Patient Zero of the Russian conspiracy,” was the first Trump affiliate to be indicted under the Mueller investigation and served 14 days in prison for making false statements to the FBI.