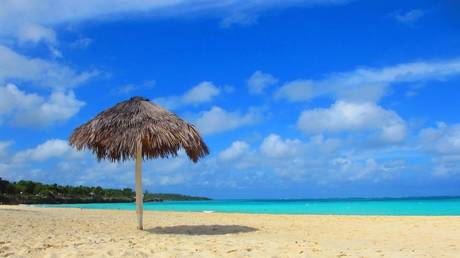 One ‘Russiagate’ researcher wants to crowdfund a trip to “investigate” 2020 Democratic contender Tulsi Gabbard in sunny Hawaii. Some critics say it’s a ploy to grab a free vacation.

Gabbard’s announcement last weekend that she will challenge Donald Trump for the presidency in 2020 united the left and the right in panic. A combat veteran, the Hawaiian congresswoman unveiled a platform focused on foreign policy issues, namely opposition to foreign wars and intervention.

Gabbard had long been an opponent of the wars in Iraq and Afghanistan, as well as Barack Obama’s air campaign in Syria. A 2017 meeting with Syrian leader Bashar al-Assad was enough to convince the establishment that Gabbard was an “Assad sympathizer,” an agent of the Kremlin, and a racist, homophobic, right-wing plant.

Caroline Orr, a researcher and editor with “Breitbart on the left” Shareblue, started digging. Of the 15 most shared URLs by “Russian-linked disinformation accounts” on Tuesday, a whopping three mentioned Gabbard. As an aside, the list of what accounts are “Russian-linked” is compiled by a firm called New Knowledge, which was recently busted for running two online election-meddling campaigns of its own in Alabama. As a further aside, New Knowledge doesn’t make its list of “Russian-linked” accounts public or reveal its methodology. You’ll have to take their word for it.

Three of the top 15 URL’s shared over the past 24 hours by 800 Russian-linked disinformation accounts tracked by Disinfo2018 are about Tulsi Gabbard, the pro-Putin, pro-Assad congresswoman who just announced she’s running for POTUS in 2020. (One URL is an article; 2 are tweets). pic.twitter.com/SG43IGt9ZV

Anti-Trump comedienne and #resistance figurehead Kathy Griffin jumped on board. “Caroline, what’s it gonna take to convince these robots?” she tweeted. “She’s (Gabbard) as nuts as Trump & a stupid as Jill Stein. What countries has she visited that are under the rule of our foreign adversaries?”

Caroline, what’s it gonna take to convince these robots? She’s as nuts as Trump & a stupid as Jill Stein. What countries has she visited that are under the rule of our foreign adversaries?I remember her making a lot of mysterious trips. We Dems weed out our bad ones unlike the Rs

Orr swore to get to the bottom of Gabbard’s blasphemous anti-war views. The Shareblue researcher set up a crowdfunding page to raise money for a trip to Hawaii to interview Gabbard’s constituents and dig up dirt. “Tulsi is a noxious politician who presents a serious threat of dividing the left,” Orr wrote, “which is exactly why Russia likes her.”

We set up the crowdfunding page as soon as she announced her candidacy b/c we’ve been worried about her for months. Our goal is to go to her district because some of her constituents & people who know her/her family have some interesting stories to tell.https://t.co/gWubQPL8zq

“You aren’t going to ‘discover’ anything that isn’t already public knowledge, especially not by going to a state where she won 83% of the vote. Bravo on scamming people to crowdfund your Hawaiian vacation.”

Orr was quickly called out, not just for trying to extract money from the anti-Trump, pro-establishment crowd, but for doing it to fund a trip to the land of Aloha.

“Of all the Russiagate grifts, trying to crowd-fund a vacation to Hawaii is the best I’ve seen,” wrote DC Sentinel reporter Sam Sacks.

When I first saw this my reaction was “yes, Gabbard is bad, but can we stop promoting the notion that we should investigate as Russian agents people whose foreign policy views we don’t like”

But then I realized this is literally a scheme to get a free vacation. https://t.co/KMKYYteszE

Assuming she raises the cash, Orr will be accompanied on her trip by a supposed cybersecurity consultant who tweets under the name ‘Alt. U.S. Press Sec.’. The crowdfunding idea seems to have been born out of a conversation between the two last Friday.

“I wanna go to Hawaii and investigate her,” Orr wrote to ‘Alt. U.S. Press Sec.’. “We…could probably crowdfund the cash pretty easily,” the pseudonymous account tweeted back. After a quick twitter poll showed a handful of #resistance types were interested, the campaign was on.

We… could probably crowdfund the cash pretty easily

In the age of Trump, crowdfunding has emerged as a novel way for the president’s opponents to bankroll everything from opposition research to legal fees. When Trump’s former attorney Michael Cohen turned on his old boss and promised to “tell the truth” about the president, a crowdfunding page set up by his lawyer raked in $185,000. Campaigns for former FBI Deputy Director Andrew McCabe and former FBI agent Peter Strzok raised almost one million dollars between them.

A campaign to raise money for Dr. Christine Blasey Ford – who accused Supreme Court Justice Brett Kavanaugh of sexual assault last year – was among the most lucrative, taking in almost $650,000 from Democrats determined to keep Kavanaugh out of the nation’s highest court.

All of these campaigns focused on the president. Orr’s is notable in that it targets a Democrat who doesn’t follow the party’s new orthodoxy. Trip to Hawaii or not, the campaign shows the party is anything but united heading into a contentious election battle next year.