Donald Trump says Russia should be at the negotiating table in the G7 meeting whether the world powers “like it or not.” The US president made the statement as he was preparing to fly to Canada for the summit.

“It used to be [the] G8 because Russia was in it, now Russia isn’t in it… But Russia should be in this meeting. Why are we having a meeting while Russia isn’t at the meeting,” the US leader told reporters, adding that he will recommend Russia’s inclusion in the summit. “Whether you like it or not, it may not be politically correct, but we have a world to run. And it’s the G7, which used to be the G8, threw Russia out, they should let Russia come back in because we should have Russia at the negotiating table,” he stated.

The 44th G7 summit is due to open in La Malbaie, Quebec. The summit has received significant attention due to a major decline in relations between the leaders of the participating states. French President Emmanuel Macron struck a hostile tone against Trump, saying that the US could be kicked out of the G7.

UK Prime Minister Theresa May may not be on the list of world leaders scheduled for bilateral meetings with Trump on the sidelines of the summit, due to an apparent rift in the ‘special relationship.’

After Quebec, Trump is headed to Singapore for a historic summit with North Korean leader Kim Jong-un.

On South Lawn before departing for Canada, Trump calls for Russia to be reinstated in G-8 (which has been the G-7 since the annexation of Crimea)

Trump’s statement was backed by the newly sworn-in Italian prime Minister Giuseppe Conte. “I agree with US President Donald Trump: Russia should be back in the G8. It is in everyone’s interest,” he wrote on Twitter.

Representatives of the EU countries agreed that the time was not right to talk about the “readmission” of Russia to the G-group, German Chancellor Angela Merkel told reporters on the sidelines of the summit, since the “conditions” for that had not been met. 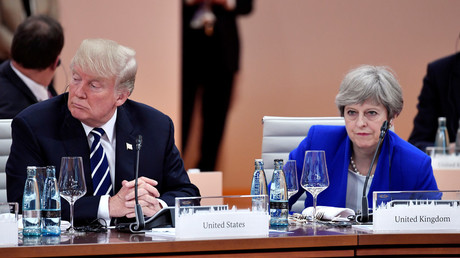 “Here we all agreed that a return of Russia to the G7-format summits can’t happen until substantial progress has been made in connection with the problems with Ukraine,” Merkel stated. “That was the common view.”

The G7 is a forum of major industrialized nations – including the US, UK, France, Germany, Canada, Italy, and Japan – which meet annually to discuss international issues.

The EU also attends the meetings. Russia was part of the group for a number of years, during which it was called the G8. It became the G7 again in 2014, when Western nations accused Russia of meddling in the Ukrainian conflict and refused to visit the group’s summit in Sochi.

Interest in dialog with the Kremlin has been expressed by a number of lawmakers from G7 countries. Thus in April of this year, the head of the parliamentary faction of the Left Party in Germany, Sahra Wagenknecht, stated that Russia should be invited to return to the G7. Her appeal was supported by another opposition MP, Alexander Graf Lambsdorff, who said that “it is reasonable to strengthen and to better organize a dialog with Russia.”