US President Donald Trump has praised Russia’s organization of the 2018 World Cup and said the US was “very honored” to be chosen as the host in 2026, along with Canada and Mexico.

“My son loves soccer, and he loves watching the World Cup,” Trump told reporters at the White House, during a photo-op with President Marcelo Rebelo de Sousa of Portugal.

“They have really done a fantastic job with the World Cup. It’s exciting, even if you’re not a soccer fan,” he said, referring to Russia. “I think the venue has been fantastic, they really have shown something very special.” 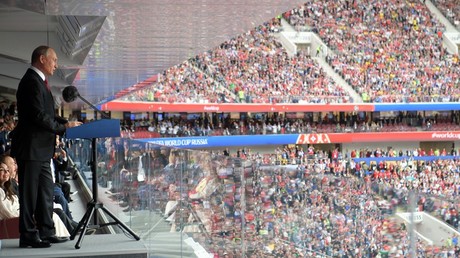 De Sousa also had reason to be pleased: Portugal has qualified for second round of the cup, taking second place in Group B.

Trump’s comments echo remarks by his national security adviser John Bolton, who is visiting Moscow at the moment. Bolton told Russian President Vladimir Putin that he looked forward to “learning how you’ve handled the World Cup so successfully.”

“We’d be happy to share our experience with you,” Putin told Bolton earlier.

Bolton was in Moscow to try and arrange a summit between Trump and Putin, reportedly taking place in mid-July. Trump said Wednesday he believes it will take place in Helsinki after the NATO summit, but the date will be officially announced on Thursday.