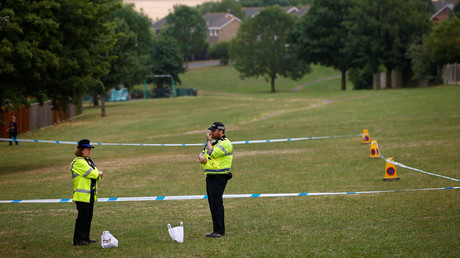 It may be less than 24 hours since two people were reportedly exposed to an “unknown substance” in Amesbury, UK, but social media is already awash with opinions about the latest whodunit despite the shortage of facts.

The incident happened just 12km from Salisbury, the scene of the dramatic and highly politicized poisoning of former Russian double agent Sergei Skripal and his daughter in March. Hours after the initial reports, the case was referred to the counter-terrorism division of the police.

Few details of the new potentially damaging case have been made public, so people on social media are in full speculation mode about it.

The fact that it happened four months to the day after the Skripals’ poisoning didn’t go unnoticed.

Exactly four months on from #Skripal, a new as yet unexplained coincidence: “major incident declared, as unknown substance leaves pair critically ill in Salisbury hospital”https://t.co/EHrP2GPYVJ
As with Skripals, new incident at Amesbury also within 10 km radius of Porton Down

Of course, assigning blame is on many people’s mind. One popular theory is that Russia needs a distraction ahead of the upcoming Trump-Putin summit in Helsinki.

As a Chess player it looks like Russia has muddied the waters again in the Salisbury incident ahead of Trump’s visit, working their mad terrorist at Porton Down conspiracy by poisoning again. Rule 1 Chinese citizens involved in finance should be careful of high rise buildings.

The UK government also seems to be in need of a distraction – from its Brexit troubles… or whatever.

Some observed how public messaging over the incident has shifted.

How the #Amesbury messaging has evolved

“At this stage there is nothing to suggest there is any risk to the wider public.”

And some say it may not be a poisoning case after all.

On #Amesbury couple, this from a Whitehall source, which counters fears that the “major incident” while worrying is #Skripal Mk II: “There is still a good chance it is not poisoning and it is drugs”