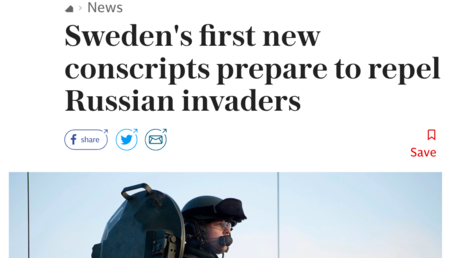 Sweden’s first batch of new conscripts since the country brought back the military draft in 2017 have begun training exercises to fend off an invasion from Russia, in news that might come as a surprise to, well…Russia.

Sweden’s first new conscripts “prepare to repel Russian invaders,” claims a sensational headline in the UK’s Telegraph newspaper — a headline which would almost make you believe there was some fact-based reason to expect an imminent Russian invasion of Sweden.

The Swedish parliament voted to reintroduce the draft in 2017, with the government citing a “deteriorated” security situation in Europe and admitting that the army “had trouble staffing the military units on a voluntary basis.”


The Telegraph article quotes Colonel Bo Stennabb, the commanding officer of a regiment of fresh-faced 19 and 20-year old conscripts. Stennabb says that “more aggressive behaviour” by Russia in the Baltic Sea, including Russian incursions into Swedish airspace (which Russia has denied), has made Europe less safe. Of course, no mention was made in the article of US military and spy planes which frequently fly close to Russia’s own borders in exactly the same area.

Anyway, aside from the usual tit-for-tat engagements between Russian and NATO planes over the Baltic, there has been no indication whatsoever that Moscow has any interest in invading Sweden — a fact of which the Telegraph is likely well aware. Still, no point wasting an opportunity to fear-monger about the Russian bear, right?

The news raised some eyebrows, however, with many surprised to learn of Russia’s impending invasion of Sweden.

I live in Russia. And I have, honestly, never heard anyone discuss the idea of invading Sweden. On the TV, the radio, on the bus, in the gym… or even in the pub. pic.twitter.com/8pEsLVMdth

I grew up in Russia and served in Soviet army. I am quite up to date on RU politics, etc. I never heard this either.

Russian ‘invasion’ hysteria in Sweden kicked off in 2014 when the country’s navy carried out a fruitless search for a Russian submarine, which had allegedly been spotted off the Swedish coast, until it later turned out that the vessel was a work boat. When a television mast came down in Sweden in 2016, some media immediately jumped to the conclusion that Russia could be the culprit.