With racial tensions in USA back in spotlight over the last few years, a gripping new RT documentary series visits African-American communities and the activists fighting against a history of racial injustice and poverty.

Like many cities across America, St. Louis, Missouri still sees its urban divide drawn along racial lines, where its black activists continue to fight battles old and new be it systemic poverty, inequality in education and employment, or extrajudicial police killings.

‘In Black Lives: Struggle’ features interviewees who do just that – they struggle. From the assault rifle-toting Ferguson protestor, to the “peace-walking” priests operating in some of the city’s most violent areas, to the mother trying to get justice for her son killed in a police raid. Each describe the bleak reality of living in America’s black neighborhoods.

“The state isn’t for us. This country doesn’t work for us. It doesn’t function for us,” says activist Dhoruba Shakur, as he stands armed outside the courthouse steps awaiting the verdict of the trial of an ex-police officer accused of killing a black man.

Referring to the governing system as a “machine” or “robot”, Shakur says: “You can only destroy a robot. It’s got to be taken down and abolished.” 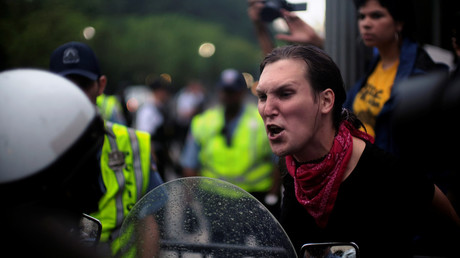 “Cause when they made the Constitution and all this b******t, it really wasn’t made for me.”

Aside from the palpable anger at the increasing number of black deaths , either at the hands of police or through other homicides, others have found ways to denounce violence.

Reverend Kenneth McCoy, who took to the streets to engage in “peace walks” through some of the city’s most violent neighbourhoods after a string of deaths of young black men and women in his “sphere of influence.”

“I decided that it just made sense for me to go out where the violence is and interact and engage the best way I could,” he said.

Walking through the night streets handing out sandwiches and bottles of water to passing residents, Reverend McCoy and Fr Jay Kanzler, are calling for an end to violence in troubled neighbourhoods saying: “Most of the people out here are not bad people – they are in bad situation.”

Gina Torres is still fighting for justice for her son, Isaiah Hammett, a young white man who was killed in a raid on their home by a SWAT team. Activists familiar with the shooting attest that Hammett’s friendship with black people resulted in police giving him “the treatment of black people.”

Driving the renewed radicalism is expressed by rapper and activist T-Dubb-O explains that “this country has been built off of black oppressions and black pain.”

“We want our freedom and we want it now. and we’re not asking.”

Watch the full first episode of Black Lives for more stories of people fighting for justice in St. Louis.