RT America has announced that Holland Cooke will take over as host of “The Big Picture” currently hosted by Thom Hartmann. Hartmann announced his departure in early September, saying his final show would be Friday, September 29.

The longest-running RT America show, “The Big Picture” tackles the latest in political news through debates, commentary and more. Whether local, national or international, nothing escapes coverage. After seven years of broadcasting, in his final episode, Thom Hartmann introduced one of his panel guests as Holland Cooke—the show’s new host, with new episodes to begin Friday, October 6.

Addressing his departure from “The Big Picture” and RT America, Hartmann said: “I feel honored to have been with RT America as host of ‘The Big Picture’. The opportunities given—from hosting  the 2012 third party presidential debate to discussing such important issues as climate change and future relations with China with some of the world’s highest regarded experts—I would not likely have found at other networks. I appreciate the enthusiasm and interest in the show, demonstrated by the millions of views and positive feedback we have received over the years. Thank you for watching, and I encourage you to continue to watch and know that our old episodes remain on The Big Picture YouTube channel.”

Hartmann is a friend and colleague of Cooke. “I know, like, and respect Holland, and am looking forward to watching The Big Picture with him as the presenter.  He’s smart, talented, and a decent and caring human being,” he said of the incoming host.

Cooke has worked in television and radio for nearly 40 years. He’s held a variety of on-air and management positions, not the least of which was his seven-year tenure as the operations manager of WTOP Radio in Washington, DC, during which time the station scored its highest ratings to-date in the all-news format. In 1991, Cooke founded FliteCom Systems, Inc., which became USA TODAY Sky Radio, the live-via-satellite news, sports and talk audio channels heard on Delta, Northwest and United Airlines. The technology they developed evolved into Sirius Satellite Radio. On January 1, 1995, Cooke began consulting full-time and was named news/talk specialist by McVay Media, the largest radio programming consulting firm in the world. His work includes programming and marketing strategies for talk radio stations from Alaska to New Zealand, career counseling for radio talent and podcasters, and Internet development for entrepreneurs, companies and radio personalities.

“I’ve always been intrigued by RT America, because of what it isn’t, and what it is. What it isn’t?  It’s not the shouting match that talk radio and much of cable news has degenerated into,” Cooke said of his move to the network. “What it is?  More light than heat. More thoughtful, curious treatment of stories that only get headlines and quotes du jour on other channels.  Stories get to ‘breathe’ here.  And there’s more variety here, stories that matter but don’t show up elsewhere. And the opportunity to work alongside the talent here?  Where do I sign!”

Holland addressed taking over for his friend Thom Hartmann, the current host, saying: “Because this is RT America’s longest-running show, Thom Hartmann leaves me big shoes to fill.  As brothers in the Talk Radio family, Thom and I have known each other for years, so I understand the guy who’s passing me that baton.” 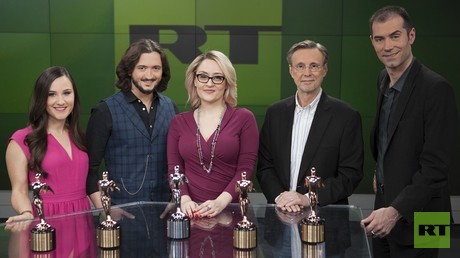 With Cooke as its host, “The Big Picture” will air Fridays at 7pm ET.

RT America channel airs from Washington, DC and is part of RT, the global television news network. Dedicated to the top US stories and most pressing issues, it is the proud home of “Politicking with Larry King,” “News with Ed Schultz,” Emmy-nominated “On Contact with Chris Hedges,” “America’s Lawyer with Mike Papantonio,” ”The Big Picture,” award winning financial show “Boom Bust” with Lindsay France, and “Watching The Hawks” with Tyrel Ventura, Tabetha Wallace and Sean Stone. In 2017 alone, RT America took home three awards at the prestigious New York Festivals, as well as eight Telly Awards.

RT broadcasts 24/7 in English, Arabic and Spanish from its studios in Moscow; Washington, DC; and London. It has a weekly TV audience of 70 million viewers in 38 countries, with an audience of 8 million in the United States according to top audience research firm Ipsos. It is also the most watched TV news network on YouTube with more than 5 billion views. RT is the winner of the Monte Carlo TV Festival Award for Best 24-hr Broadcast, and a five-time Emmy finalist.