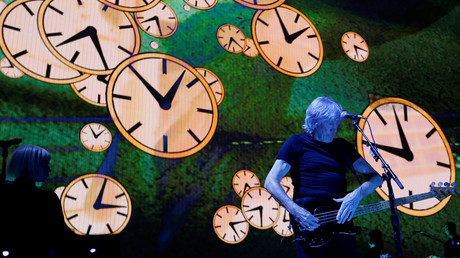 A 70ft message mocking Donald Trump and a huge pig balloon were just some of the sights and sounds that whipped up the crowd at Roger Waters’ activism-inspired show in London’s Hyde Park.

Crowds cheered as the words “Trump is a pig” were laser-projected across the width of the stage at the former Pink Floyd rocker’s politically-charged show at the British Summer Time Festival on Friday. An inflatable pig bearing the message “Stay human, or die” also floated overhead. Adding new meaning to an old classic, Waters then rounded off the theme by launching into Pink Floyd’s 1977 song ‘Pigs.’

Rogers didn’t hold back with his stage show, with some of the artwork painting Trump as a KKK figure in a white hood and mask. In other images, the construction tycoon was mocked up to look like he was holding a gun or vomiting with the word “charade” written across his face.

The 74-year-old rocker lent his support to various human rights and environmental causes throughout the gig – but he didn’t stop there. At one stage, children in orange jumpsuits marched on stage during ‘Another Brick In the Wall,’ a possible reference to Guantanamo Bay where around 40 prisoners are still being held without trial on suspected terrorism offences.

The show sparked a strong reaction from online commentators, some of whom questioned Waters’ sincerity; while others who asked whether the props could be used alongside the “Trump baby” balloon set to be flown over London ahead of Donald Trump’s state visit to the UK next week.

READ MORE: Giant Trump baby filled with hot air to float over London – unless Sadiq Khan puts a stop to it

Roger Waters. Cut the crap. You have a fucking Lexus backstage waiting to whisk you away from the poor people

@rogerwaters Any chance the pig might make an appearance with the Trump baby that will be flying over London next week? This would have to be the perfect opportunity.

On a related note, maybe @rogerwaters can do an impromptu concert underneath the Trump baby balloon