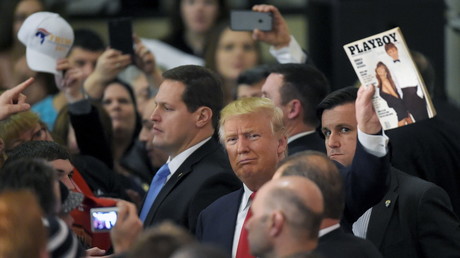 The week has gone from bad to worse for US President Donald Trump’s embattled lawyer Michael Cohen after damning reports of yet another high-profile ‘hush money’ sex scandal within the RNC emerged Friday.

Cohen reportedly negotiated a $1.6 million confidentiality deal in 2017 between the former RNC deputy finance chair and LA-based venture capitalist Elliott Broidy, 60, and a former Playboy model, who claims he impregnated her. Broidy tendered his resignation on Friday afternoon in the wake of the explosive report by the Wall Street Journal.

“I acknowledge I had a consensual relationship with a Playboy Playmate,” Broidy said in a statement, as cited by the WSJ. “At the end of our relationship, this woman shared with me that she was pregnant. She alone decided that she did not want to continue with the pregnancy and I offered to help her financially during this difficult period.”

“It is unfortunate that this personal matter between two consenting adults is the subject of national discussion just because of Michael Cohen’s involvement,” Broidy added. “Mr. Cohen reached out to me after being contacted by this woman’s attorney, Keith Davidson. Although I had not previously hired Mr. Cohen, I retained Mr. Cohen after he informed me about his prior relationship with Mr. Davidson.”

The matter might have remained personal, as the relations between a California businessman and a Playmate is nothing unusual in Tinseltown, but Broidy reportedly helped raise over $108 million in funding for Trump’s 2016 presidential campaign and donated more than $160,000 to the RNC last year. Both Cohen and Broidy were appointed to the post of Republican National Convention chairman in April 2017. Cohen remains in his position for the time being, but as the investigatory screws turn, he may soon be forced out.

According to the WSJ report, the sum of $1.6 million was due to be paid to the unnamed former Playboy model in quarterly installments over a period of two years. The scandal places even more pressure and scrutiny on President Trump’s lawyer and self-described fixer, Michael Cohen, following raids on his offices earlier this week by federal law enforcement officers.

Federal investigators are reportedly sifting through Cohen’s records seized in the raids to check for evidence of bank fraud, but they have also stumbled upon a veritable treasure trove of ‘thousands of privileged communications,” according to Cohen’s lawyer, Todd Harrison. Cohen’s team was accused of employing delay tactics and wildly overboard claims about attorney-client privilege, in order to obtain a temporary restraining order to stall the investigation. Cohen has been ordered to appear in court Monday.

The revelations could not have come at worse time for the Trump administration and his legal team, given the allegations made by former adult film star Stephanie Clifford, also known as Stormy Daniels, that Cohen paid her $130,000 to sign a non-disclosure agreement (NDA), preventing her from discussing the details of an alleged sexual encounter with Trump in 2006.

Both the White House and Cohen have denied such an encounter took place, though a legal battle is ongoing to determine the validity of the NDA. Interestingly, both Broidy and Trump’s alleged NDAs use the same pseudonyms, David Dennison and Peggy Peterson.

The lawyer representing the woman who Broidy allegedly had the sexual relationship with also negotiated a $150,000 payment to another former Playboy model, Karen McDougal, for the rights to her story of an alleged affair with Donald Trump.