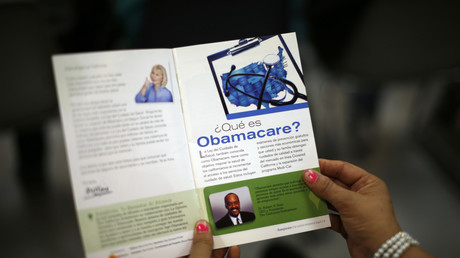 A Texas federal judge has struck down the Affordable Care Act, ruling it can not be classed as a tax without a penalty for those who don’t buy health insurance. Without that penalty, he wrote, “Obamacare” is unconstitutional.

The ruling is expected to be appealed to the Supreme Court and the law will remain in effect until the appeals process is over. The ACA previously withstood more than 70 unsuccessful repeal attempts.

As I predicted all along, Obamacare has been struck down as an UNCONSTITUTIONAL disaster! Now Congress must pass a STRONG law that provides GREAT healthcare and protects pre-existing conditions. Mitch and Nancy, get it done!

US District Judge Reed O’Connor sided with a coalition of state governments, led by Texas, that argued removing the “individual mandate” last year – a provision included in Trump’s tax bill – invalidated the entire law. The Supreme Court had previously upheld the ACA in 2012 based on its classification as a tax – something within Congress’ authority to impose. But without that provision, “the architectural design fails,” O’Connor wrote in his decision.

President Trump celebrated the decision, calling it “Great news for America!” He had promised voters a repeal of the legislation, loathed by Republicans before it even passed in 2010, that was considered Barack Obama’s signature achievement.

Also on rt.com
15mn Americans would opt out of Obamacare if they could – CBO


The ruling “exposes the monstrous endgame of Republicans’ all-out assault” on Americans most in need of healthcare, said soon-to-be Speaker of the House Nancy Pelosi, vowing to act swiftly once she was returned to her rightful place in January. Meanwhile Senate Minority Leader Chuck Schumer said that, if upheld, it would be a “disaster for tens of millions of American families.”

The ACA was passed to expand healthcare coverage to Americans who could not afford market-rate insurance but did not qualify for existing government assistance programs. It expanded Medicaid eligibility and forbid charging higher rates for pre-existing conditions. The resulting costs were offset by increased income taxes on wealthy earners and an “individual mandate” that all Americans enroll in a plan or pay a tax penalty. Since its passage, the number of uninsured Americans dropped by a third, though the law has been blamed for skyrocketing insurance premiums and other healthcare costs.