The Intercept has identified eight AT&T facilities across the United States which are allegedly being used by the NSA to monitor internet users’ emails, social media posts and internet browsing.

The centers are known as ‘peering’ facilities’ and processes data from both AT&T customers and those of other U.S. internet providers, as well as telecoms companies from Sweden, India, Germany and Italy. 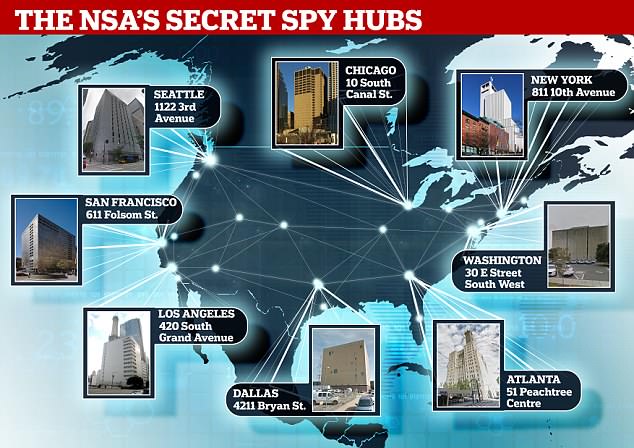 Spy HQs: This map shows the eight locations of the AT&T facilities allegedly being used by the NSA to spy on internet users

‘It’s eye-opening and ominous the extent to which this is happening right here on American soil,’ said Elizabeth Goitein, co-director of the Liberty and National Security Program at the Brennan Center for Justice told The Intercept.

‘It puts a face on surveillance that we could never think of before in terms of actual buildings and actual facilities in our own cities, in our own backyards.’

All eight buildings, in cities such as Los Angeles, NYC, Seattle and Washington DC, have several things in common, as well as being AT&T facilities.

They are tall and imposing structures with few or blacked out windows, and – either seemingly or confirmed to be – built to withstand a nuclear attack.