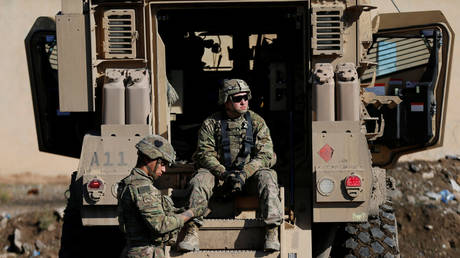 A seemingly patriotic story on the National Guard’s news site – of a father and daughter being deployed to the same country simultaneously – has instead illustrated for many the futility of America’s endless Middle East wars.

US Army 1st Lieutenant Jordan Lemens was only ten years old when her father – Chief Warrant Officer 5 Joseph Lemens – went abroad for his first deployment over 15 years ago. Jordan has now been in Iraq with the 101st Airborne Division for two months, while her father has been there with the 935th Aviation Support Battalion – a Missouri National Guard unit – for six.

Father and daughter were briefly united at Al Asad Air Base last month after Joseph made arrangements to spend a few hours on the base.

“Not very many people can say that they have been with their family on a deployment,” said Jordan. “It seems almost surreal.”

The story was jumped on by the National Guard’s online news site, and was portrayed as a welcome piece of uplifting news from a miserable combat zone. The piece was torn apart on Twitter, however.

“I hope one day my kid and I can both look back, nostalgic, wistful… maybe a little rueful, about how a morally obscure endless war of occupation defined and consumed both our lives,” wrote one commenter.

I hope one day my kid and I can both look back, nostalgic, wistful… maybe a little rueful, about how a morally obscure endless war of occupation defined and consumed both our lives.

This is what happens when you create a power vacuum.

#1 Thank for your service

#2 This is completely insane and it wouldn’t be hard to believe that her future child will be serving in the same war.

Not to take away from their happiness, but this…this actually isn’t something that we should be celebrating.

The United States has been at war in Afghanistan for over 17 years, and in Iraq for 15 years this month. Since 9/11, the US government spent an estimated $5.6 trillion on its ‘war on terror’ – including the invasions of Iraq and Afghanistan, as well as Homeland Security expansion and veterans’ costs. Almost 7,000 US troops have died in Afghanistan and Iraq.

Opposition to these wars has mounted from both the left and the right. President Donald Trump has railed against America’s “forever war,” calling the invasion of Iraq “the single worst decision ever made.” However, Trump has faced stiff opposition to his decision to withdraw US troops from Syria and his promise to do the same in Afghanistan. Most recently, Trump announced plans to leave a small contingent of US forces behind in Syria, and another in Iraq to “watch Iran.”

Meanwhile, the ‘forever war’ drags on. As of last September, teenagers born after the 9/11 attacks are now eligible to enlist in the US military and soon may serve in a war that began before they were born.