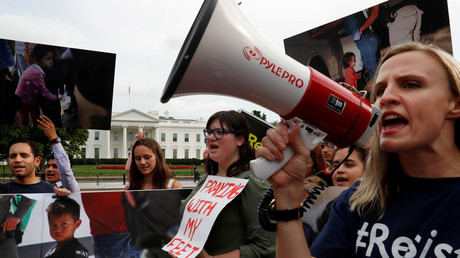 There is no love lost between President Donald Trump and mainstream US media, which he has repeatedly called “fake news.” His critics are now using those words to blame him for inciting a shooting at a local newspaper.

Five people were killed and three more injured after a gunman attacked the Capital Gazette newsroom in Annapolis, Maryland on Thursday. The local newspaper had no ideological bent and the gunman’s motives –or identity– are unknown as of yet.

That has not stopped the self-styled anti-Trump Resistance from accusing the US president of inspiring the attack, going so far as to claim he has “blood on his hands.”

Milo Yiannopoulos: “I can’t wait for the vigilante squads to start gunning journalists down on sight.”

President Trump: “The FAKE NEWS media is not my enemy, it is the enemy of the American people. SICK!”#CapitalGazette

And your daily attacks on the “fake news media” and calling journalists the “enemy of the people” may have contributed to this horrendous tragedy.

When the President of the United States repeatedly calls for violence against the media, and then someone shoots up a newspaper office in Annapolis, then yeah – whatever the details end up being – he’s morally and criminally responsible for it. Lock him up.

Trump has called the media the “enemy of the people” in 2 of the last 3 weekly lists.

TODAY: Journalists gunned down at the offices of a newspaper in Annapolis.

Is the media ready yet to talk about the VIOLENCE Trump is inciting in America?

Trump fifteen days ago: Media is the nation’s “biggest enemy.”

Milo Yiannopoulos two days ago: “I can’t wait for the vigilante squads to start gunning journalists down.”

TRUMP: Media is the enemy of the state

Trump branded the media as the “enemy of the American people.”
Trump retweeted a video of himself attacking CNN.
Milo Yiannopoulos “joked” about “gunning journalists down on sight.”
Why are so many on the right enabling people who incite violence?#CapitalGazette#resist#trump

1. Trump calls the media “the enemy” and the “greatest threat to the country.”

In a February 2017 tweet, Trump had called “fake news” media the “enemy of the American people” – singling out CNN, the New York Times, NBC News, ABC, and CBS. He repeated the phrase on Monday at a rally in South Carolina.

“The enemy of the people I call ’em,” he said, pointing to the media he dubbed “fake news.”

It wasn’t any of these outlets that got attacked, however, but a local newspaper in a Democratic-majority region of Maryland, for reasons that are so far shrouded in mystery.