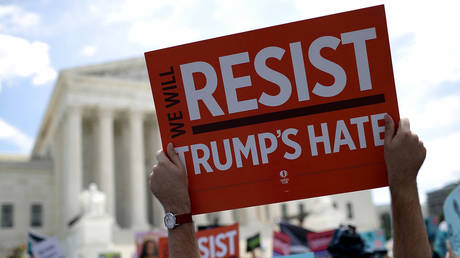 The Mueller report left some of President Donald Trump’s conduct up for debate, but clearly stated no collusion with Russia took place. Not for one journalist, who launched a Twitter crusade to prove otherwise…with 453 tweets.

Beginning on the evening before Attorney General William Barr’s pre-report press conference, Newsweek columnist and English professor Seth Abramson set out to live-tweet the report’s release. Helpfully, Abramson pointed out that he’s the bestselling author of ‘Proof of Collusion: How Trump Betrayed America.’

Clearly, he found some things to disagree with in the Mueller report – which showed the exact opposite – going on an epic rant in 453 tweets of anger, disbelief, and white-hot liberal rage, (condensed here for easy reading).


Abramson greeted Barr’s press conference as a chance for the Attorney General to “misrepresent” the report’s conclusions, and called on Democrats to “unleash” subpoenas on the Justice Department for the full, unredacted report, before he had even seen it. Democrats have since heeded this call, with Rep. Jerry Nadler firing off a subpoena first thing Friday morning.

27/ Democrats should respond to what Barr and the White House have done by unleashing *all* their subpoenas *tonight*. Scores of them. *Hundreds*, if need be. It’s time to stop screwing around.

Abramson accused Trump of running a “domestic disinformation” campaign by claiming he did not collude with Russia, and accused Mueller of not going after enough types of collusion.

68/ Did Mueller look at bribery, money laundering, RICO, illegal solicitation of foreign campaign donations, aiding and abetting, conspiracy to defraud the United States (which might well be seen *not* as a conspiracy “with” Russian nationals) or just one strand of “conspiracy”?

The enraged columnist went on to draw a distinction between ‘collusion’ and ‘conspiracy,’ the first being a catch-all term for shady behavior and the second a criminal offense. Mueller’s report focused on the criminal definition and found nothing, but that’s because Abramson insists “Trump’s collusion with Russia was part of a *multinational* conspiracy Mueller didn’t investigate.”

91/ And the way Barr has framed the Mueller Report, it’s *certain* we won’t even get a *complete* answer on whether there was a criminal conspiracy in the collusion we know about—as Trump’s collusion with Russia was part of a *multinational* conspiracy Mueller didn’t investigate.

On and on the tweetstorm went, with Abramson making sure to remind readers that “nearly all of this content is in my book,” and “giving the finger” to critics.

This continues until he arrives at the main thrust of his insanely long Twitter thread: a plug for another upcoming book, promising to blow the lid on a wider, grander conspiracy to help Trump win the 2016 election. Whether the #Resistance will still be hungry for ‘Proof of Conspiracy’ by the time its August release date rolls around, however, is a different story.

I tweeted a few times yesterday about PROOF OF CONSPIRACY. Here it is, if you’re interested in checking out the book description. It comes out in August. https://t.co/YBrqfTtZ4Q

Abramson’s Twitter incontinence was mocked by the Right as another case of Trump Derangement Syndrome and an inability to let the ‘Russiagate’ narrative die. However, the self-appointed chief scribe of the #Resistance has also been slammed by the Left. Hard-liberal news site Slate even published an article in 2017 entitled “Democrats: Please, Please Stop Sharing Seth Abramson’s Very Bad Tweets.”

As Abramson tweeted bombshells and smoking guns, fishing for likes and retweets day in and day out, The Atlantic and New Republic called the professor a “conspiracy theorist,” while Deadspin called him “the king of diarrhea tweeting.” As #Resistance journalism goes, Abramson is closer to the notorious Krassenstein brothers than he is to even the most partisan hacks at CNN.

European intel agencies have given proof of Trump-Russia collusion to the FBI; Congress must now hold PUBLIC hearings. RETWEET if you agree. pic.twitter.com/sL7kGdbKk8

What’s more, Abramson has been busted for outright lies before. Reporting for the Huffington Post in 2016, he declared that Bernie Sanders was actually winning the path to Democratic nomination, while the opposite was true. Confronted about the claim, Abramson called his reporting “experimental journalism” that embraces “the multi-dimensionality of the metanarrative.”

In this dimension, however, Trump did not collude with Russia.