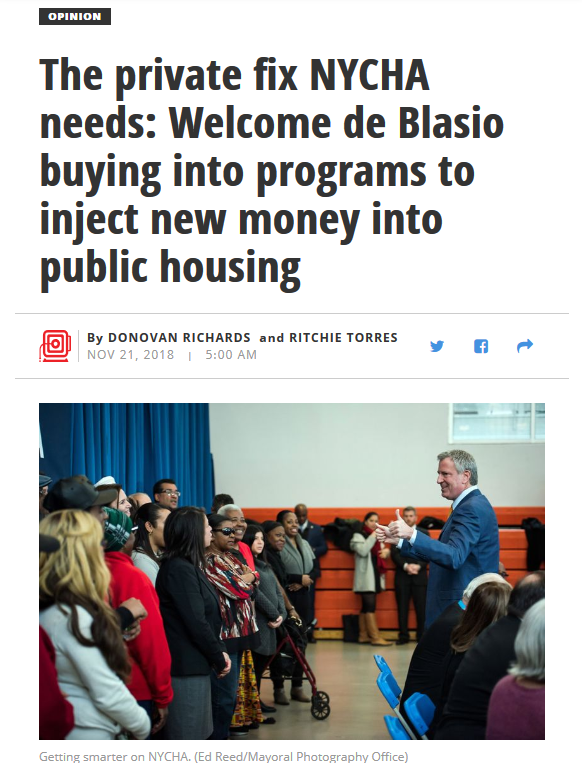 Privatization of New York City’s public housing got a warm reception in much of the local press (Daily News, 11/21/18).

When governments propose multi-billion-dollar programs, one would hope media coverage would center first and foremost the human beings most directly affected by them—especially when those programs affect the lives of some of the most marginalized people in society. New York City Mayor Bill de Blasio’s proposal to fill the $31.8 billion five-year funding gap for repairs and replacements of thousands of deteriorating public housing apartments in the New York City Housing Authority (NYCHA), the US’s largest provider of public housing, is a perfect test case.

Several alarm bells should have rung when this was announced last November. After all, converting public housing apartments into quasi-private Section 8 housing, selling air rights and inserting private developments into public housing projects sounds a lot like privatization—a direct attack on the public nature of public housing.

So surely when journalists heard that there would be no additional city funding (cursed disinvestment!) for NYC public housing, but rather a whole host of privatization initiatives, their first thought was: What do the residents think? Right?

Wrong. A Nexis search of English-language news articles (excluding TV news write-ups) that include “NYCHA 2.0,” or mention “NYCHA” and words like “private” and “privatize” in reference to the proposed public/private partnerships, turned up 42 reports over a four-month period (11/15/18–3/15/19). Public housing residents represented only 9 percent of the 105 total sources quoted in these stories.

Government officials, largely pro–NYCHA 2.0, made up 63 percent of sources, followed by nonprofit advocates (14 percent).  These advocates often come from orgs funded by the real estate, construction and development industries, like the Citizen Budget Commission and the New York Housing Conference.

Corporate sources, some of whom were former government officials, were also 9 percent of sources. Evidently real estate/development industry voices are just as elucidating as the people whose actual homes are at stake under NYCHA 2.0. But then, this wouldn’t be the first time that voices with the most at stake were pushed to the margins of their own story by corporate media (FAIR.org, 7/1/14, 7/17/18, 6/21/18).

Politico (11/15/19) was first to report on NYCHA 2.0’s whispers. Aside from a quick “the proposals…will likely spark concerns from residents and elected officials” tacked onto the end of the article, the piece’s description of the plan’s key features reads like an investment sales pitch:

The vouchers are more appealing to private developers who are given partial control over the sites and are responsible for managing the buildings, generally leading to faster repairs.

Crain’s (11/16/18) similarly acknowledges that infills “might rankle affordable housing advocates,” without subsequently consulting a single housing advocate or resident. Instead, they quote a special advisor to the Jonathan Rose Companies development firm, passively identified as “a former NYCHA executive who helped draft the plan.” Other reports (e.g., Real Estate Weekly, 12/5/18; QNS, 12/20/18) raised no concerns at all. Metro New York (11/19/18) took De Blasio’s statement, “These [public/private] partnerships are one of our best-proven tools to deliver critical repairs,” as a matter of fact. 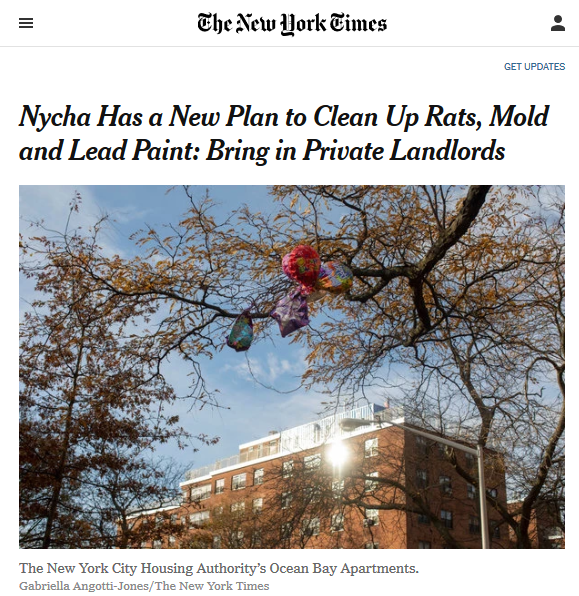 The New York Times (11/15/18) cited public housing committee chair Alicka Ampry-Samuel’s reluctant support for NYCHA 2.0, but followed her qualms with two resident sources (the only residents in the article), who praised the Ocean Bay Apartments’ 2017 conversion to a program called RAD (Rental Assistance Demonstration), under which private developers lease public housing and take on the role of landlord. The author waited until near the end of the piece to question the dangers of infills:

Constructing private residential developments on NYCHA land has long been a contentious issue among residents, who fear it fuels gentrification and opens a path to the future privatization of public housing.

Expanding no further on what gentrification or privatization might entail for neighborhood residents, the Times seems to think that the main issue is hypocrisy—that the plan might “also conflict with the mayor’s stated commitment to build affordable housing.” But breaking promises also has real-life implications worth describing, as Michelle Chen did in In These Times (8/22/13):

As the white-hot real estate industry invades neighborhoods of the poor, immigrants and people of color, gentrification is displacing working-class families and undermines the communities that, while economically marginalized, have historically anchored the city’s culture.

Just three days after the November 15 piece, the Times (11/18/19) reported on NYCHA’s appalling practice of disputing lead tests in public housing apartments, but oddly notes in its subhead, “Private landlords almost never do this.” Funny how this point reaches subhead-level significance in a 3,000-word article that touched on private landlord practices just twice; it noted that accepting positive lead results “was a lesson private landlords learned years ago,” and that

private landlords almost never contest a finding of lead; they did so in only 4 percent of the 5,000 orders they received over the same period, records show.

Perish the thought that the Times cite one of its own pieces (5/20/18) that revealed NYC private landlords’ systematic neglect and exploitation of tenants across the city, particularly those in black and brown working-class neighborhoods. It’s almost as if the Times is trying to make private landlords look…preferable. 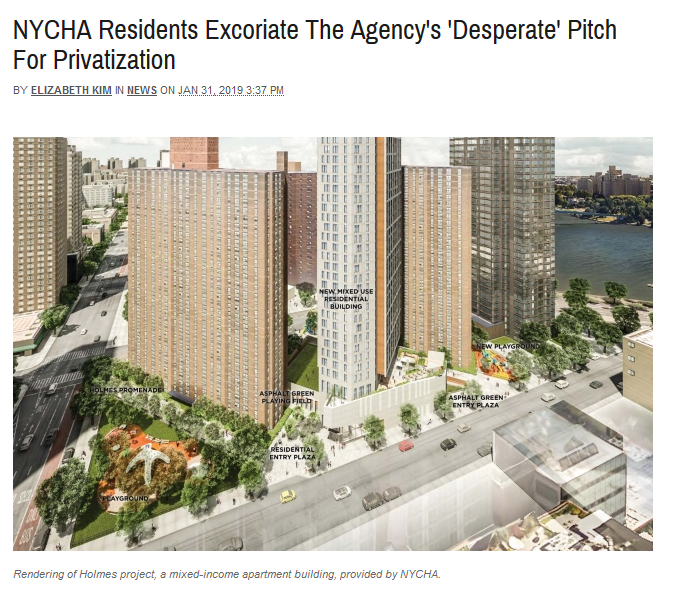 Gothamist‘s report (1/31/19) was the only article in the survey that focused on critics of the city’s privatization efforts.

Gothamist’s “NYCHA Residents Excoriate the Agency’s ‘Desperate’ Pitch for Privatization” (1/31/19) was the only article in the survey that centered opponents to the city’s privatization efforts. Even that article quoted just one public housing resident, who expressed opposition to the pending 50-story mixed-income infill by Fetner Properties in her community on East 92nd Street:

“You are putting a monstrosity there,” said Lakeesha Taylor, a mother who grew up in the Holmes Tower. “It’s not what we want. It’s not about our future. It’s about your future, and your pockets.”

The Real Deal’s February 1 report quoted four public housing residents, the most of any article in the survey, about NYCHA elevators’ chronic malfunction. But in the ending section that dealt with NYCHA 2.0’s public/private solutions, headed “Private answers?” the authors only sourced Susan Camerata, the CFO of Wavecrest management, and a former “mechanic’s helper with NYCHA.” To their credit, they mention that “the companies already tapped to take over [NYCHA] properties have drawn criticism for their maintenance of elevators,” but the last word on alleged malpractice comes from Camerata:

“This was a tragic situation,” said Wavecrest CFO Susan Camerata. “This was not something that was caused by Wavecrest Management.” The DOB said that the official cause of the accident was that the elevator was overloaded at the time.

“I think [the privatization program] is one of the only avenues that NYCHA has,” Camerata said. “The deferred maintenance [in public housing] is horrific.”

Other media, like National Real Estate Investor, didn’t even attempt to hide their giddiness. In “A Look at NYCHA’s Plans to Improve Public Housing” (2/12/19), the trade publication painted NYCHA 2.0 as a “bold” proposal that “frees NYCHA from the constant threat that Congress will underfund the public housing program.” The developer savior complex in full gear, NREI only lamented that the initiative will leave more than 100,000 apartments “still dependent on federal funding.”

But who cares if NYCHA gets fixed through private or federal funding? NYCHA just needs fixing, period. Right? 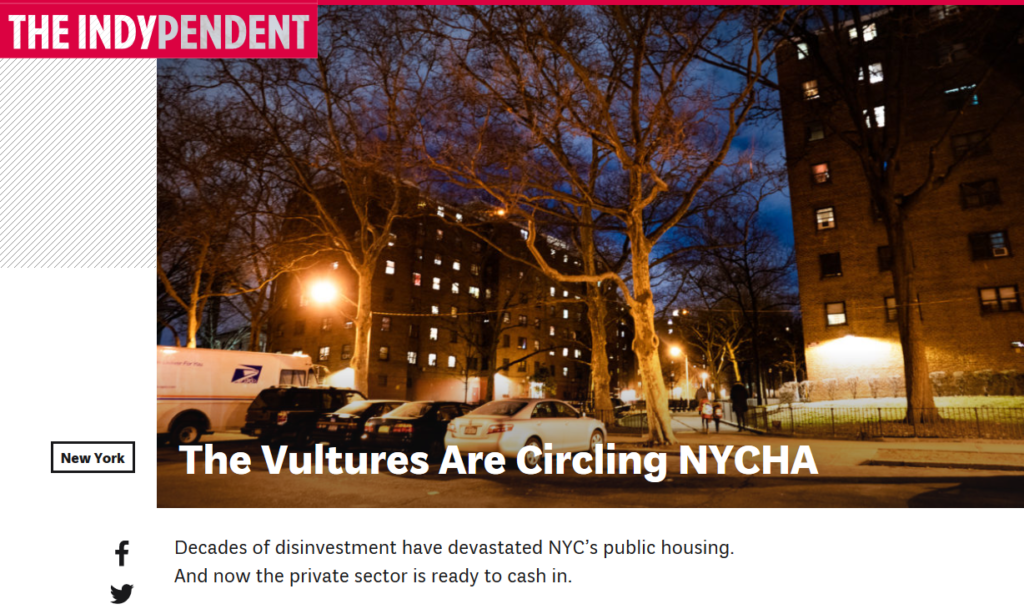 Not quite. As Rico Cleffi reported in an Indypendent article (2/1/19) that wasn’t in the Nexis sample, developers aren’t invested in affordable housing because they sincerely care about the poor, cold, lead-infected residents. Rather:

Affordable housing is now a multibillion-dollar growth industry, replete with publicly traded firms, lobbyists, trade associations, journals and conferences. The potential for profit has led to a dynamic where the same developers that created the conditions of displacement in New York City can be awarded lucrative contracts for public housing.

Perhaps their incentive is more pecuniary than charitable, though the distinction between capitalist and philanthropist is increasingly blurred. Particularly after Hurricane Sandy devastated NYCHA properties, these vulturesque developers practice what Naomi Klein calls the “shock doctrine.” The real estate sector helped gut public housing, but they’re here to save the day yet again!

On RAD conversions, Cleffi points out that “it is also unlikely that a private developer would be more responsive to tenants than the government,” because the real money is made in the renovation/rebuilding stages, near the beginning of the management lease. There’s little long-term gain for private managers to be responsible landlords, and it’s unclear that the city will put in concrete safeguards for residents against abuse.

“RAD tenants are routinely re-screened at the time of conversion for income, criminal history, credit and other requirements,” which “has resulted in evictions and monetary buy-out packages that force tenants to move from the property” after RAD conversion. NHLP also reports that owners of RAD properties have in many instances “explicitly impeded or prohibited tenant organizing efforts” (which are protected by federal law) by preventing the distribution of leaflets, disrupting meetings and elections, threatening “to have non-tenant tenant organizers arrested for organizing tenants,” and refusing to distribute mandated funding to tenants associations.

But you wouldn’t know any of that from the vast majority of  NYCHA 2.0’s media coverage.

In the already rare occasion that we hear from tenants in the news, we almost never hear from those who are fighting to be considered. More often than not, news reports portray residents as passive victims, who lack the agency to change their own lives—but thank God the real estate sector has stepped up to the plate!

Residents deserve more, not less control in the fate of their housing, and their fears about the privatization of their homes and neighborhoods deserve real attention from the press. When NYCHA coverage marginalizes tenants’ opinions and neglects opponents of privatization, stories about mold in bathrooms, lead chips around cribs, or elevator nightmares come across more like investment catalogues for real estate bottom-feeders than sincere attempts to listen to the people most affected.