On February 22, President Donald Trump suggested that violent movies and video games are the real cause of mass shootings:

I’m hearing more and more people say the level of violence on video games is really shaping young people’s thoughts. And then you go the further step, and that’s the movies…. Maybe they have to put a rating system for that.

The response by tech, video game, and movie outlets, predictably, was that this is a distraction from the real issue of gun ownership. What this misses is that they aren’t actually different issues: The connection between gun violence on screen and in reality goes both ways, and if we really looked at it the way the NRA and the Republicans are suggesting, it’s unlikely that either would be happy with the results.

As far as Trump’s idea of having a rating system for movies, that system already exists. The system was created and is enforced by a trade association representing Hollywood studios called the Motion Picture Association of America, and it is deeply, perhaps irreparably, flawed. In addition to disproportionately punishing sex and female pleasure over violence (as covered in the 2006 documentary This Film Is Not Yet Rated), the MPAA has always been more squeamish about the consequences of violence than that violence itself. 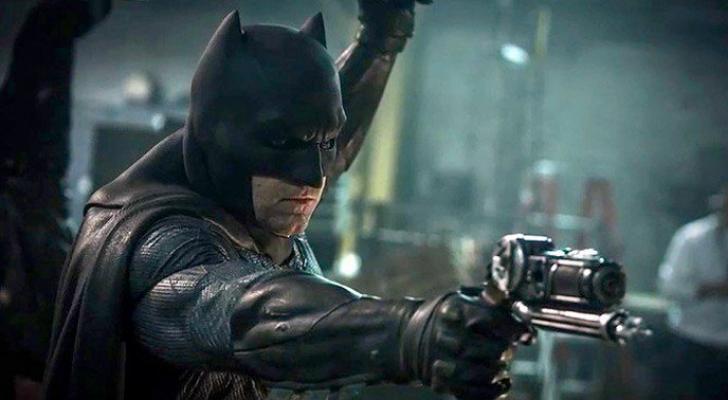 When comparing the PG-13 theatrical release of Batman v. Superman: Dawn of Justice (2016) to the R-rated “Ultimate Edition,” both feature the same kind of violence, but only the latter shows the blood spray and human suffering that results, including shots of blood being smeared on walls, clouds of blood after people are shot, and blood spraying on the wall after a character is hit with an assault rifle. Screenrant (6/28/16) described the Ultimate Edition as being “a bit more realistic” because of its inclusion of human suffering after the gunfire.

A ticket to a PG-13 movie can be sold to anyone over 13, while an R rating requires viewers under 17 to be accompanied by a parent or adult guardian. The PG-13 rating (by far the most lucrative one the MPAA dishes out) was invented in 1984 when Indiana Jones and the Temple of Doom didn’t seem quite violent enough for an R rating, but still featured a guy’s heart being torn out of his chest. In director Stephen Spielberg’s words, it was a way to put “a little hot sauce” on a PG rating, while still allowing children to watch.

Hollywood’s penchant for sensationalizing violence is an old, tired argument. You can find studies and anecdotal evidence both that it’s poisoning our children, and that it’s almost entirely harmless. But while people fret over that controversy, they ignore the fact that most people get their education on how guns work from on-screen violence, and movies (and TV) mislead their audience on how useful — not to mention easy to use — firearms are. 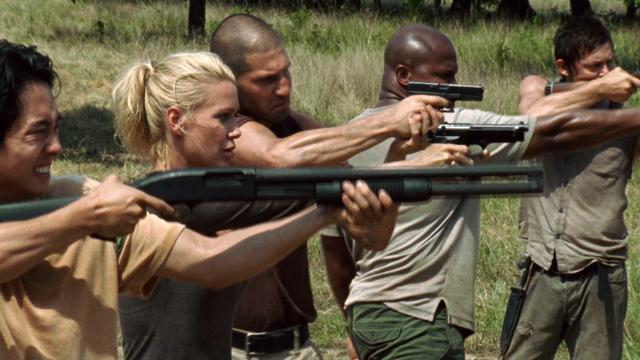 On The Walking Dead, everyone knows how to use a gun.

In Django Unchained (2012), the title character becomes an expert marksman with a pistol after just one winter’s worth of practice. In The Walking Dead (2010–present), several characters who once worked as teachers or lawyers are capable of pulling off zombie headshots at a moment’s notice, and basically only miss if the plot demands it. Major movies that feature people with no weapons training using guns like they were experts include The Fate of the Furious (2017), Annihilation (2018), Baby Driver (2017) and any of the countless action movies that rely on relatable characters who are put in extraordinary situations and have to shoot their way out of them.

Even when they give “experts” guns, they make the weapons unrealistically easy to use. In John Wick (2014), Keanu Reeve’s titular character fires an unsuppressed .40 (or 9mm) caliber pistol several dozen times in an enclosed space, and then has a hushed conversation with a police officer just a few seconds later. In No Country for Old Men (2012), the assassin Chigurh uses a shotgun with a suppressor that renders its shots whisper-quiet, even though suppressed weapons in real life are as loud as a jackhammer. 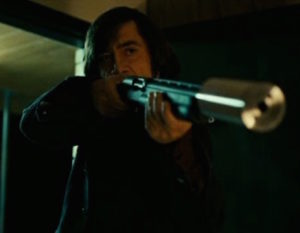 Javier Bardem wields a “silenced” shotgun as Chigurh in No Country for Old Men.

The never-stated but always implicit message is that gunplay is second-nature to any American—or at least it would become second nature, if you found yourself in a highly stressful situation. If you’ve been trained to use a gun, well, it’s hard to imagine a problem that this incredibly versatile tool couldn’t solve.

The reality is nothing like that. The sound of a gunshot is many magnitudes louder than what can damage your hearing, especially in an enclosed space, so Wick would have been rendered deaf by that gun fight (unless there’s some advanced assassin training that toughens up your eardrums). And stressful situations, instead of honing your murderous instincts, make even the well-trained worse with their weapons. Police officers are able to hit their targets only 18 percent of the time in simulated combat situations, and innocent bystanders so often and so tragically end up worse off than the people actually fighting.

Val Kilmer in Heat has a shootout in downtown LA without hitting any bystanders.

You might think there are exceptions;  the movie Heat (1995) is often touted by gun enthusiasts as an amazing example of realistic gunfighting on screen. But regardless of Val Kilmer’s proper firing stance and ability to change his assault rifle’s magazine quickly, the movie still shows an absolutely ludicrous situation where police officers initiate a gun fight with bank robbers in downtown Los Angeles, and then continue firing at them through crowded streets. Al Pacino shoots Tom Sizemore in the head while the latter carries a small child as a hostage, endangering a minor in order to prevent a few hundred thousand dollars from being stolen from an FDIC-insured bank. The only innocent bystanders killed are the ones intentionally targeted by criminals. Even in a “realistic” movie gun fight, there’s no collateral damage, no one bleeds painfully to death in the street, and the only thing that can stop a bad guy with a gun is a good guy with a gun.

Unlike the controversial and undoubtedly complex relationship between on-screen violence and real world violence, the connection between movie gun sensationalism and gun enthusiasts’ buying habits is clear. At the beginning of Dirty Harry (1971), Harry Callahan, played by Clint Eastwood, threatens a criminal by giving him the sales pitch for his Smith & Wesson Model 29. “This is a .44 Magnum,” he says, pointing the weapon at him, “the most powerful handgun in the world, and would blow your head clean off.”

He’s not lying: In 1971, Smith & Wesson really had made the most powerful revolver to ever exist. So powerful, in fact, that it wasn’t selling—it was too loud and too big to be of any practical use to anyone. Demand had fallen so low that the company had stopped producing them. But once Dirty Harry came out, demand for the Model 29 tripled overnight. That trend continued with every sequel, and legend has it that every time a Dirty Harry movie airs on TV, sales for this weapon spike. 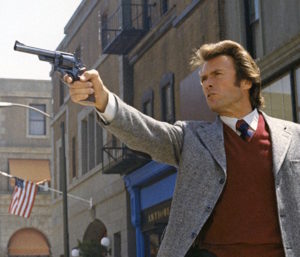 This is Hollywood’s relationship with the gun industry: When you put a gun on screen, people are going to want to buy it, regardless of whether it’s used by good guys or bad guys, and regardless of whether or not the gun actually exists. In Die Hard 2 (1990), Bruce Willis claims that a character is using a “Glock 7,” and even though a Glock 7 isn’t a real gun, Glock is a real gun company that, unlike other companies, told Hollywood that they didn’t mind if heroes or villains used their guns in movies. That marketing decision — a disregard for morality — helped make them the most popular gun company in America. The implication is that Hollywood can increase a weapon’s sales by telling audiences that the weapon is really useful for crime.

The NRA knows all of this. That’s why, even while railing against irresponsible gun violence in movies, they maintain a “Hollywood Guns” exhibit in their National Firearms Museum, recognizing iconic guns of film history. Dirty Harry’s Smith & Wesson is there, naturally—along with Chigurh’s suppressed shotgun. And the relationship goes both ways, since production companies have campaigned against gun control laws because “they need to use real weapons for verisimilitude” (New York Times, 5/1/13).

So we have a rating system that rewards movies for making gun violence look fun, easy and harmless—except to the bad guys—and a gun industry that benefits from that mythology by selling more guns. Whether or not you agree with the idea that violent movies are hurting anyone, it’s clear who they’re helping, and that’s the gun industry. Hollywood is nothing less than the advertising department for all deadly weapons in the country. If we actually took a hard look at gun violence in film and tried to take action because of it, you can bet the NRA would change their talking points real quick.