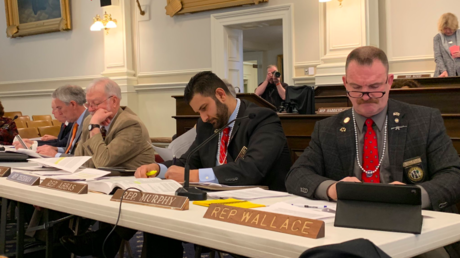 The sight of Republican representatives wearing pearl necklaces at a gun control debate in New Hampshire sparked a wave of outrage, followed by cries of ‘fake news’ as both sides contend their meaning.

Male Republican members of the New Hampshire House of Representatives were photographed wearing pearl necklaces at a gun control hearing while gun control activists shared their stories on Tuesday.

The images were shared on social media by Moms Demand Action founder Shannon Watts, where they soon spread and fuelled impassioned outrage as many expressed disgust at what was perceived as an insult to mothers who were giving testimony of their experiences with gun violence. The hearing was to debate House Bill 687-FN, which would restrict access to firearms for potentially dangerous people.

The right likes to say the left is easily upset over things.

Yet here they are: listening to testifying stories while wearing pearls, with which to clutch.

Sexist, juvenile, embarrassing, and a bad reflection on this entire country for the world to see that this is the type of people that we elect to our political offices. All levels of United States politics are displaying elementary school type of behavior.

There seems to be two stories to this and the two better get it cleared up or many people who were being supportive will get some bad publicity. It seems they wore the pearls as a show of support so..before shouting sexist lets double check the facts.

As the outrage mounted, Democrats like Kamala Harris and Cory Booker added their rebuke of the Republicans. However, Women’s Defense League of New Hampshire president Kimberly Morin provided an alternative narrative to the meaning behind the pearls that raised questions about outrage culture.

“The PEARLS are in support of the Women’s Defense League,” she wrote. “Women who ACTUALLY PROMOTE GUN SAFETY and WOMEN’S RIGHTS.”

According to Morin, the pro-gun group has been wearing pearls at similar hearings since 2016. The pearls allegedly don’t mock gun control advocates, but are a symbol of support for women’s right to bear arms.

Sure enough, RT has found evidence of the group wearing pearls in the past.