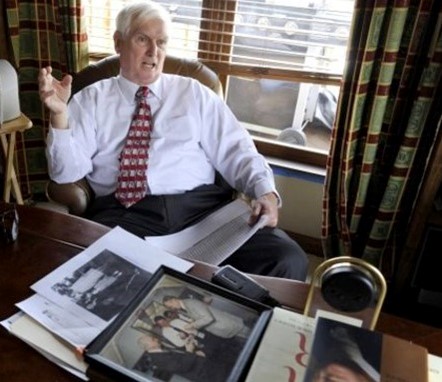 Rep. John J. Duncan, Jr. (R-TN) announced on Monday that he will not seek reelection in 2018 to the United States House of Representatives. In addition to being one of the longest-serving Republican members of the House (representing the second district of Tennessee since 1988), Duncan, who argues that being antiwar is a conservative position, is also one of the House’s strongest proponents for peace.

In his April of 2015 editorial “A Return to The Peace Party,” Duncan lamented the Republican Party drifting toward being a war-supporting party and argued that it should revert to its past position as the peace party. “When I was a teenager,” Duncan wrote, “I remember reading a publication from the Republican National Committee that said, ‘Democrats start wars, Republicans end them.’” Duncan wrote in the editorial that he not only thought the party’s shift toward hawkishness is wrong but also declared, “I think it is a recipe for defeat if my Republican party becomes known as a party favoring permanent, forever wars – war without end.”

Duncan elaborated on his editorial’s analysis in an in-depth C-SPAN interview the next month.

Duncan has also spoken up in the House against war, including in a June of 2015 speech in which Duncan proclaimed, “there has been nothing conservative about our policy of permanent, forever, endless war in the Middle East,” and in March of 2014 when he advised in a speech in opposition to US intervention in Ukraine that, “We don’t need to be sending billions to Ukraine, and we especially should not escalate this situation into some type of military confrontation.”

Duncan has cast votes in opposition to US wars and sanctions, including when he was one of only six House Republicans to vote in October of 2002 against authorizing the US commencing a war against Iraq and one of only three House members to vote last week against legislation imposing and expanding sanctions against Iran, North Korea, and Russia.

Duncan voted against the Iraq War despite the strong support in his district for starting the war. “When I pushed that button to vote no on that war,” Duncan is quoted in a Knoxville News Sentinel article regarding his vote, “I thought I might be ending my political career. I’m not trying to over-dramatize it. I really thought I might be.”

That vote did not end Duncan’s political career. But, 15 years and eight elections later, Duncan himself has decided to leave the House.

Commenting this week regarding his work in the House in a statement about his decision to not seek reelection, Duncan wrote, “During my time in Congress, I’ve worked as hard as I can to fight for what I believe in – fiscal conservatism, smaller government, and a more humble foreign policy that puts America first.”

Duncan is a member of the Advisory Board of the Ron Paul Institute for Peace and Prosperity.

Reprinted from The Ron Paul Institute for Peace & Prosperity.