Legal gaps and government negligence make the UK a safe haven for companies involved in illicit arms deals, Amnesty International says, adding that one of the “largest” alleged illegal arms supplies to South Sudan was brokered by a UK-based firm.

“Glaring gaps in UK company regulation mean a dealer of illicit arms can go online and set up a UK company to front its activities with fewer checks than joining a gym or hiring a car,” James Lynch, Amnesty International’s Head of Arms Control and Human Rights, said, calling on British authorities to “urgently review” their company registration procedures. 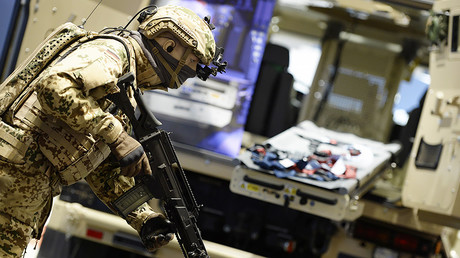 On September 25, the UK-based human rights NGO issued a report in which it particularly focused on the role of a UK-registered “shell” company in what it called one of the “largest arms deals to South Sudan.”

In the case outlined in the report, commercial documents obtained by Amnesty designated a company named S-Profit Ltd – registered in the UK as an official supplier in a 2014 deal which involved providing thousands of small arms worth $64 million to South Sudan.

The deal was a part of a bigger contract between a Ukrainian state arms company and a UAE-based company to supply weapons worth $169 million to the South Sudanese government.

Involvement of a UK-based company in any arms transfers to South Sudan, which has been immersed in a bloody civil war since 2013, violates the international Arms Trade Treaty as well as UK domestic law and stated British policy on South Sudan, Amnesty says.

It says further the British government was well aware of similar practices “taking place on British soil for more than eight years” but did not take any measures to stop the practice.

“South Sudan is awash with weapons that have been used to kill and maim thousands of civilians, causing Africa’s biggest refugee crisis. The UK government has been a vocal proponent of a UN arms embargo on South Sudan, yet is turning a blind eye to illegal deals taking place right under its nose,” Lynch said.

However, the NGO conceded that it was unable to verify if any of the weapons listed in the commercial documents it obtained were indeed delivered to South Sudan, but said the deal could still “constitute one of the largest publicly disclosed arms transfers to South Sudan since the outbreak of fighting in December 2013.”

Amnesty also said it saw documents showing S-Profit Ltd’s involvement in contract negotiations for weapons and military hardware to Egypt, Senegal, Mali, Rwanda, Ukraine and Peru, as well as to private companies in Serbia, Ukraine, Poland and Australia, adding that it was unable to find any UK trade control licenses for any of these deals.

The NGO went on to say that regulatory gaps at Companies House, the government body responsible for registering companies enables anyone to set up a company in the UK online without providing any identity documents.

The watchdog also said UK law does not require a company to indicate its involvement in the arms trade but the British government did not make any changes to close this gap.

It also did not take “any meaningful enforcement action” against weapons dealers supplying arms to human rights abusers and embargoed destinations, such as Syria, Eritrea and South Sudan, despite being well aware of their activities for many years.

The NGO then urged British authorities to toughen up the laws regulating company registrations in the UK as well as to compile a register of arms brokers to remedy the situation.

The UK has already courted controversy with its questionable arms trade policy. Earlier in September, it was revealed that some of the countries that received official invitations to the UK biggest arms fair, the Defense and Security Equipment International Exhibition (DSEI), were labeled human rights abusers by the British Foreign Office.

The issue then prompted a wave of public protests outside the exhibition venue, with demonstrators seeking to highlight the “deadly consequences of the arms trade.”