Members of a Syrian refugee family, including six children, were left “shaking and crying” hours after settling into their new home in Stoke-on-Trent when a neighbor allegedly hurled racial insults at them. The insulted family reportedly said they wanted to go back to Syria.

Police have launched an inquiry into the incident that occurred on June 30, the day 20 refugees who had fled war-torn Syria were given keys to their new homes in Stoke-on-Trent. 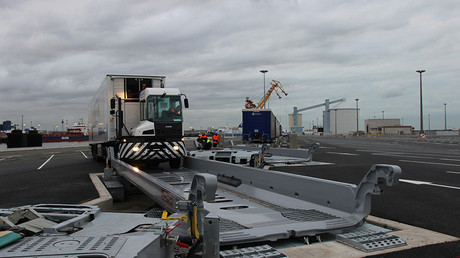 While three of the four Syrian families did not appear to experience any problems with the neighbors, one of the families was taken aback by a worse-than-lukewarm welcome. As all the members of the extensive family comprising three adults and six children arrived, a social worker, who was accompanying the group, asked a neighbor to turn down some loud music.

Instead of complying, the neighbor reportedly retaliated saying he had had to endure noise every day during the preparation of the apartment for the family.

“I’m not having a family like that living next door to me,” he said, according to IBT Times, referring to their ethnic background.

Although the verbal altercation happened when the members of the family were inside the house, they felt deeply insulted by the words.

“The family were shaking and crying and even asked to be taken back to Syria. I could not leave them in that state, so the only option was to take them back to my house, where we gave them a meal to break their fast and we gave them our beds,” Rev Sally Smith, who runs a local refugee charity, told the Stoke Sentinel.

In the wake of the incident, which the authorities argued was “a very isolated” one, the council decided to remove them from the apartment as soon as possible.

“To avoid this unsettling the family, who were indoors at the time, we acted swiftly and took the decision to move the family in with one of the other Syrian families,” Randy Conteh, the Stoke council’s representative said, as cited by the BBC. He said that the other three families were “met with the support of local people that our city is famous for.”

However, another family also refused to stay in the house located in the same area in solidarity with the insulted refugees. Both were relocated to a hotel out of safety concerns with the authorities looking for a more suitable estate.

Smith said the negligent choice of a receiving neighborhood by the city’s council is to blame for the hostile welcome, saying the local authorities refused the assistance of the church in seeking the best place for the arrivals.

“The council chose not to engage with any of us and resettled the families themselves, without taking into account the type of community they were settling them into,” she was quoted as saying, while recalling that the neighborhood once was “a hotbed of BNP [British National Party] and EDL [English Defence League] activity,” according to IBM Times.

In 2006, Stoke-on-Trent emerged as a far-right British National Party poster city with the party claiming five city councilors. The then-party chairman Nick Griffin, who led the party from 1999 to 2014, even praised the city as “the jewel in the crown” for the ultranationalist party. However, since then it has lost its council seats, with its vote falling to less than 3 percent during the two past council elections.

The refugees were receiving accommodation under UK government’s Syrian Vulnerable Person Resettlement scheme, established in 2014 and significantly extended in 2015 to relocate some 20,000 people within the next five years