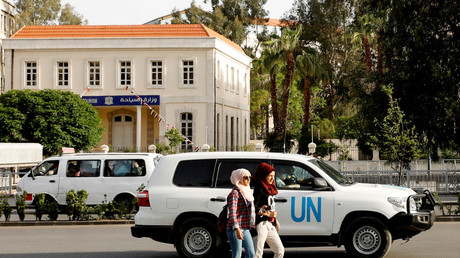 Shadow Foreign Secretary Emily Thornberry says that “red tape” and concerns over safety have stopped OPCW inspectors carrying out their investigation into the alleged chemical weapons attack in Douma, Syria.

Speaking on the BBC’s Question Time program, Thornberry appeared to back Russia’s version of events regarding the investigation, while responding to comments made by a government minister on the panel, saying: “I don’t accept what [Treasury Secretary Liz Truss] says about the Russians stopping it. My understanding is that it’s a United Nations problem with their red tape and their safety and with getting their stuff through. That is what I am told.”

This response was met with some jeers from the Question Time audience, although Thornberry appeared not to be affected by the reaction, going on to state: “There are weapon inspectors in Damascus and they are going in and what they need to do is they need to prove that the chemical weapons were used and that is the baseline and that is where we start.”

The director general of the Organization for the Prohibition of Chemical Weapons (OPCW), Ahmet Uzumcu, has said Syria and Russia had cited “pending security issues” as the reason for the hold-up in the investigation.

OPCW inspectors have been given the responsibility to investigate the alleged chemical attack that is claimed to have killed as many as 75 people in Douma on April 7, including some children, according to reports.

In response, UK Prime Minister Theresa May authorized military airstrikes in coalition with the US and France, citing that it was “highly likely” Syrian President Bashar Assad ordered the attack.

Critics of this military intervention such as Jeremy Corbyn, the Labour leader, have questioned the legality of such a move, suggesting that “international law does not permit individual states to use force on the territory of other states in order to pursue humanitarian ends determined by those states.”