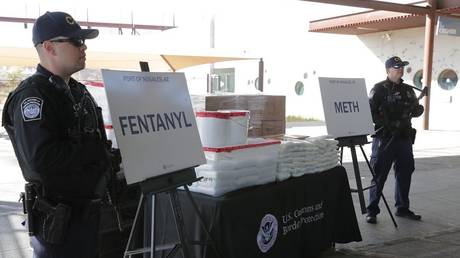 US Customs & Border Patrol agents caught a truck at the Mexican border loaded with meth and enough fentanyl to kill 57 million Americans. The bust was used by both President Donald Trump and his critics in the border wall battle.

On Thursday, the CBP made public that its agents in Arizona had found 254 pounds (115 kg) of fentanyl and 395 pounds (179 kg) of methamphetamine on a tractor-trailer transporting cucumbers from Mexico. The contraband was discovered by a CBP canine at the Mariposa port of entry in Nogales, just past noon on Saturday.

While the fentanyl has been sent to the laboratory for detailed analysis, the substance is so lethal that this amount has been estimated as enough to kill 57 million Americans – roughly a fifth of the entire population, currently estimated at 325.7 million.

“This is the largest fentanyl seizure in any port of entry” and “in the history of CBP,” Guadalupe Ramirez, acting director of field operations in Tucson told the Arizona Republic.

President Trump praised the CBP for the bust on Thursday evening.

Our great U.S. Border Patrol Agents made the biggest Fentanyl bust in our Country’s history. Thanks, as always, for a job well done!

His critics in the media, however, were quick to point out that the deadly cargo was intercepted at a port of entry, arguing that his proposed border wall would not have made the slightest bit of difference.

Guess where? Port of entry, not desert.

Guess how? In a tractor-trailer, not a backpack.

Guess what didn’t stop it? A wall. Agents using technology did. https://t.co/zoLG3Iuvdj

The largest seizure of fentanyl in U.S. history came through a port of entry in a tractor-trailer that was stopped at a border checkpoint in Arizona. No wall involved. https://t.co/GGTY2Sd3vj

Mark my words: Trump will tweet about the massive Fentanyl seizure in AZ.

Mark my words: He will not mention it was at a port of entry, where a border wall wouldn’t matter.https://t.co/7sVwurRSQK

Democrats have rejected Trump’s border wall proposal as costly, ineffective and most of all “immoral,” vowing never to approve any funding for it in Congress. Instead, they propose to improve border security with more technology at ports of entry, arguing that this is the way most illegal drugs arrive into the US.

Some Trump supporters have pointed out, however, that this only applies to the drugs actually getting intercepted, since there is no way to account for the narcotics that are actually smuggled into the country successfully.

.@AaronBlake, if this much Fentanyl was intercepted at a port of entry, think how many more tons are coming across the unprotected portions of the border.

While Trump agrees with fortifying the border crossings, he is also insisting on his campaign promise to build a physical barrier along at least some portions of the border – about a quarter of the 2,000-mile stretch, according to the most recent proposal. He says this is a solution supported by the CBP and Department of Homeland Security experts.

Trump’s determination to “build the wall” and the Democrats’ determination to stop him have already resulted in a record 35-day government shutdown, which only ended in a three-week reprieve intended to give Congress time to draft a compromise bill. With a week gone by and no sign of a deal, however, another shutdown or an executive declaration of a national emergency appears imminent.