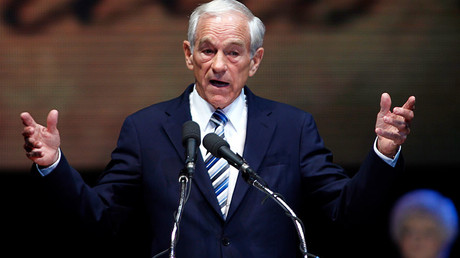 US President Donald Trump’s plans to increase the number of troops in Afghanistan risk alienating his base and are unlikely to win him any favor with the Washington establishment, says a prominent former member of Congress.

“Even if he flip-flops and goes along with the neocons, which it looks like he has, he’s not going to win them over. The people who support McCain and Graham and Rubio aren’t going to support him,” Paul told RT, naming the senators from Arizona, South Carolina and Florida known for being foreign policy hawks. “I think he loses in a political way, he loses some of the support from his base.”

Trump’s decision to drop the ‘Mother of all Bombs’ on suspected Islamic State (IS, formerly ISIS/ISIL) militants operating in Afghanistan in April has already undermined support he may have garnered among independents and libertarians. His current U-turn, however, may prove to be the straw that broke the camel’s back for many of his supporters – and won’t win Trump any friends among his critics, Paul said.

“There’s a lot of foreign anger directed toward us… [But] Americans don’t lie awake at night fearing that someone from Afghanistan will come and kill them… It hasn’t been happening, isn’t going to happen,” Paul added.

In addition, Trump’s repeated criticism of the US military’s Middle Eastern misadventures under both the Obama and Bush administrations are now coming back to haunt him, as he struggles to tease out an effective strategy for Afghanistan with his national security advisor, General H.R. McMaster.

“His goal isn’t to get it done inside six months or a year; he’s planning to be there for the long-term. He wants to increase the troop levels, and he will, but we don’t know exactly [by how much],” Paul told RT.

Paul believes that rather than adopt the hands-on approach promised by candidate Trump, the president will outsource the majority of the decision-making to his generals.

“It sounds to me like even he wants to give away some of his authority and say ‘some of the generals are in charge. Let them make all the decisions,’” Paul warned, calling it a “a recipe for disaster.”

“Generals are trained to kill people and Trump says we should be killing more people in Afghanistan,” the former congressman from Texas said, adding that it may be more a case of business-as-usual rather than the art of the deal.

“I don’t think there’s anything new. The words are a little different – he says he’s not into nation-building – but that was a pretense anyway; how many nations have we really built or improved?” Paul said. “We’ve torn nations apart. He changes the words and makes it sound like the world will come apart if we don’t continue to be the world’s policeman.”