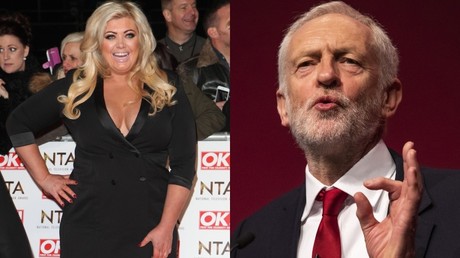 Reality TV star Gemma Collins has come out as a major Jeremy Corbyn fan, describing her moment with the Labour leader at an awards show as like “When Harry Met Sally,” claiming she wants to get involved in politics.

The Only Way Is Essex (TOWIE) celeb, who has amassed a huge social media following, may have raised some eyebrows in declaring not only an interest in politics, but a love for Corbyn. The chance meeting came on the red carpet of The Pride of Britain awards show – an event to honor British people who have demonstrated bravery in challenging situations.

READ MORE: PM ‘should do some jail time’: Stormzy gets political at the Brits

Asked to describe the meeting, Collins, whose father is a “lifelong” Labour supporter said that it had been a “magical moment,” where Corbyn had been very complimentary – and insisted she wanted to help promote his party’s policies so that they’re “easier to understand” for people.

The TOWIE star told the Mirror: “He liked my dress – he obviously loved it that I was wearing red. It was like When Harry Met Sally.”

The iconic 80s movie is infamous due to a scene where ‘Sally’, played Meg Ryan, fakes an orgasm in front of ‘Harry’, Billy Crystal, and a packed restaurant.

Collins confirmed that she asked Corbyn out to lunch. “I want to go to lunch with him. I’m not finished with Corbyn – he’s inspired me. He’s always saying let’s build a fairer Britain… let’s make a change,” Collins insisted.

According to Collins, the primary reason she’s a Corbyn fan is his support for the NHS and in particular his policy on hospital car parking charges.

Collins said: “Do you know why I love Jeremy? He wants to end hospital car parking charges. I’m not being funny, but someone’s died – a member of your family – and you’ve gotta put three quid in the meter?

“It’s just not the time. Your mum has a heart attack, yet you’ve got to rustle around in your bag for £5?”