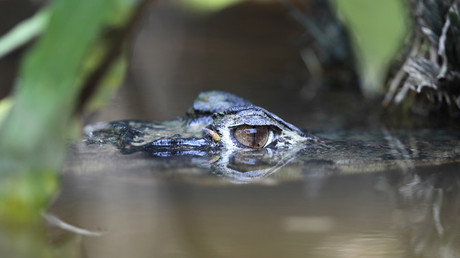 An incredible video of a man apparently rescuing his friend from an approaching crocodile has been doing the rounds online, with many stunned viewers commending him for his bravery. However, all is not as it seems.

Social media users are sharing a video of a man in a what looks like a river, desperately trying to swim away from a pursuing croc as his friend looks on from the riverbank.

The friend tries to throw rocks to stop the sharp-toothed predator from reaching his pal, but fails to drive the animal away. In the end, he leaps into the water just in time to frighten the animal and help his friend escape to dry land.

The crocodile rescue might look extremely brave, but it’s really just an elaborate practical joke, as revealed in a Youtube video by prankster Jay Karl.

The video shows the panic-inducing crocodile was nothing more than a mechanical floating animal head, available to buy on Amazon. Karl uses it to scare a range of unsuspecting victims featured in the video compilation, all of whom react in terror until they realize what’s really going on. Two of the prank victims are the guys from the croc video clip circulating online.

The incident was filmed at an unnamed lake in Tennessee, and Karl’s footage of the two friends is longer than the other versions doing the rounds. It shows the first jumping into water from a rope. He’s far from the bank when someone suddenly shouts, “there’s a gator in the water.” He panics and starts swimming away as fast as he can.

From watching the video, it appears that his friend’s bravery could be real, even though the croc isn’t. That is, unless his friend was in on the prank, too. Further exploration of social media suggests that far from believing he was risking life and limb to save his friend, the ‘brave’ croc confonter was more likely party to the elaborate hoax.

A man with the same long hair and chest tattoo appears in Karl’s Instagram feed. On May 14, Karl shared a photo of himself taken at Watauga Lake in Tennessee holding the alligator head on a boat. The long-haired man is standing behind him holding a bag and wearing dark swim shorts, not the bright blue ones he was wearing in the rescue video.

Another video posted to Instagram on the same day shows Karl swinging into a lake on a rope, with the long haired man standing behind him. According to Instagram, this was taken at South Holston Lake, which is also in Tennessee.