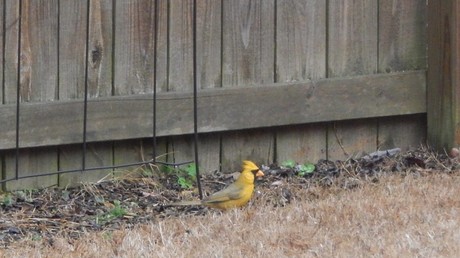 A rare, yellow-colored American Northern Cardinal was spotted in an Alabama backyard in January. The “one-in-a-million” cardinal has excited birdwatchers across the US.

Cardinals usually have red feathers. This bird, however, is a mustard-yellow color, likely due to a pigment mutation.

Charlie Stephenson first noticed the yellow bird in her garden in January. She told the Shelby County Reporter it has made almost daily visits to her backyard ever since.

“I was looking out the window and I saw it eating,” Stephenson said. “I realized that it was a cardinal and I ran to get my camera. I managed to get a quick photo before it flew up to high branch.”

Stephenson is a birdwatcher and knew she had spotted something special. “It’s exciting every time he comes to the back yard,” Stephenson said.

Hill says the cardinal has xanthochroism, a genetic mutation which makes the pigments the bird gets from food yellow instead of red. However, there may be a more sinister reason behind the bird’s bright shade.

The National Audubon Society’s Geoff LeBaron told Audobon.org that, as the cardinal’s feathers appear frayed, it could be a sign of a poor diet or environmental stress. These factors can change the way birds express the pigments they consume. “Time will tell with this bird,” LeBaron said, explaining if the bird is still yellow next winter (after it has shed its old feathers), a genetic mutation is the most likely reason for the yellow color.

Yellow American Northern Cardinals are only seen about once a year in the US. There hasn’t been a documented sighting in five years.