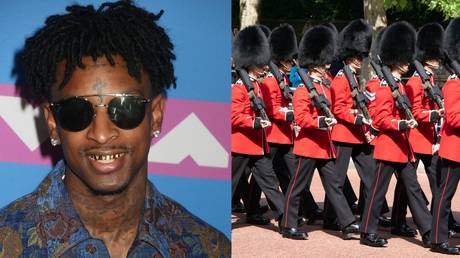 Rapper 21 Savage, who was long considered to be a homegrown Atlanta talent, has been arrested by the US immigration, which said he is a British citizen, who overstayed his visa by 13 years.

The Atlanta-based rapper was arrested on Sunday morning after ICE agents pulled over a car, in which he and three other people were travelling. The agency described the op as a targeted law enforcement raid. He and his companions were arrested and 21 Savage was outed as being a UK citizen illegally staying in the US.

In a statement, following the 26-year-old’s arrest, the ICE said that the Grammy nominee, whose real name Sha Yaa Bin Abraham-Joseph, “was taken into ICE custody as he is unlawfully present in the US and also a convicted felon.”


The ICE spokesman said that the rapper arrived into the US from the UK in July 2005 on non-immigrant visa and did not leave by July 2006, when his visa expired. In addition to being an illegal alien, the hip-hop star was swooped in 2014 on felony drug charges.

The agency has initiated deportation proceedings against the rapper, who will now face an immigration court.

The agency also alleged that the rapper has artificially crafted his image to appear a homegrown celebrity while actually being a foreigner.

“His whole public persona is false. He actually came to the U.S. from the U.K. as a teen and overstayed his visa,” an ICE spokesman said, as reported by CNN correspondent Nick Valencia on Twitter.

The news has come as a complete shock to the fans of the heavily-tattooed performer, who was widely presumed to have been born and bred in Atlanta. Twitter has immediately lost it, erupting in a storm of memes referencing the rapper’s noble origins. London’s iconic red telephone box, the famous double-decker and her Majesty the Queen all have come into action.

Meaner commentators have been cracking up jokes as the expense of 21 Savage’s lyrics that now have obtained a whole new meaning.

The rapper’s attorney, Dina LaPolt, described his client as “a role model to the young people in the country – especially in Atlanta, Georgia,” adding that his defense team has been working to have ICE release the artist and “clear up any misunderstandings.”

The rapper has been making an illustrious career in the US. His newest album, ‘I Am > I Was’ was released in December 2018 and was number one on the Billboard 200 for two weeks. The album features Travis Scott, Childish Gambino and others.